On the main route to the Georgian border from Armenia, the road crosses territory that until intense fighting in 1994 was part of Azerbaijan.  The road passes through several ruined villages – in some of which  just one wall of each building has been left standing:

A weird sight on a hillside to the right of the road is the completely restored 7th-century Voskepan Church surrounded by ruined and abandoned houses:

Some of the homes that were destroyed in the war or abandoned: 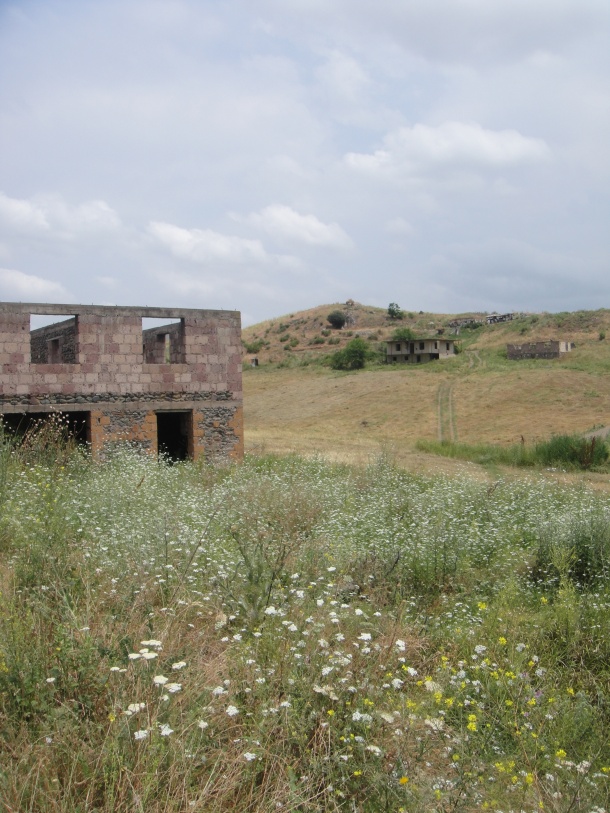 Abandoned Azerbaijani houses do not mean the area itself is abandoned though as you can see from this military outpost… This close to the current (and hotly disputed) border of Azerbaijan, there is a heavy Armenian military presence here: 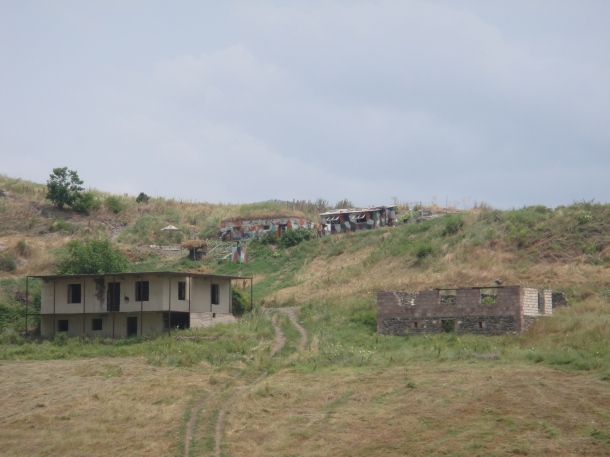 In a demonstration that life goes on, these Armenian farmers have opted to grow hay in the ruins of a former Azerbaijani village:

The road re-enters Armenia proper and 41 kilometers from the junction with the former main road to Azerbaijan it reaches the town of Noyemberian.

Now, any suggestion of ethnic cleansing is particularly sensitive in Armenia given its own history of genocide at the hands of the Turks less than a century ago…  And undoubtedly even just the title of this post will result in some hate emails from Armenians.  However, it cannot be denied that this was once territory that belonged to Azerbaijan and now all of the Azerbaijanis are gone.  The Azerbaijanis did not leave because they sold their homes at a tidy profit to the Armenians and retired comfortably in Florida.  They left because they were killed or because they feared for their lives.   And they have not been welcomed back.

This is one of those situations where there are no good guys or bad guys.  Both sides did nasty, unpleasant things during the war.  And both sides were equally victimized by the other.  Both sides have convincing arguments about the justness of their cause.  How do you place sympathies or decide which side is right or wrong in an environment like that?

So, spoils of war?

Either way, the “facts on the ground” have been established and it would likely take another war to change them.

3 thoughts on “Armenian Ethnic Cleansing? Or The Spoils Of War?”