Found in a narrow valley in the foothills of Jebel Libnan ash-Sharqiyya, Maaloula (also known as Maalula) is an appealing little village in which yellow-stone and silvery-blue-painted homes are stacked up against a sheer cliff.

The mainly Greek Catholic village is one of the last remaining places where Aramaic, the language of Jesus Christ, is still spoken. Aramaic was once widely spoken in the Middle East and is one of the oldest continually spoken languages in the world, reaching its zenith around 500 BC. It bears similarities to both Arabic and Hebrew.

In Maaloula’s Monastery and Church of Saint Sergius, Aramaic is proudly alive and well. More than 5,000 local worshipers all speak Aramaic.

If one uses local transportation, as we did, to reach Maaloula, your visit will start at this main square:

Some views of the center of Maaloula: 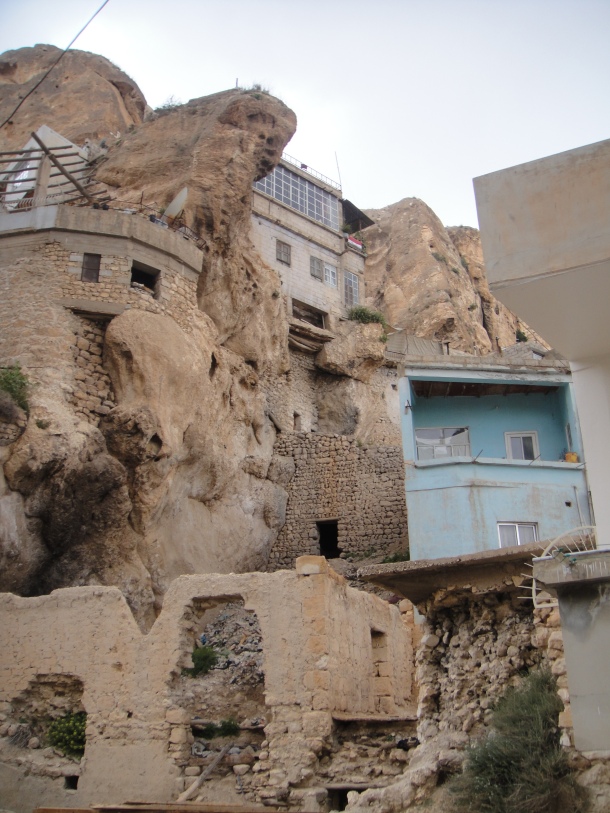 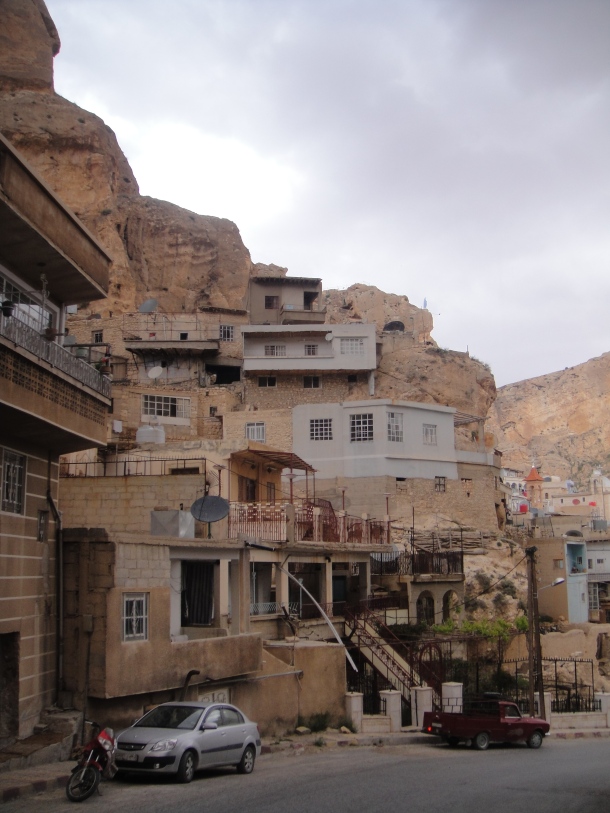 If one hikes up the hill to the right of the main square, some great views of the town can be had: 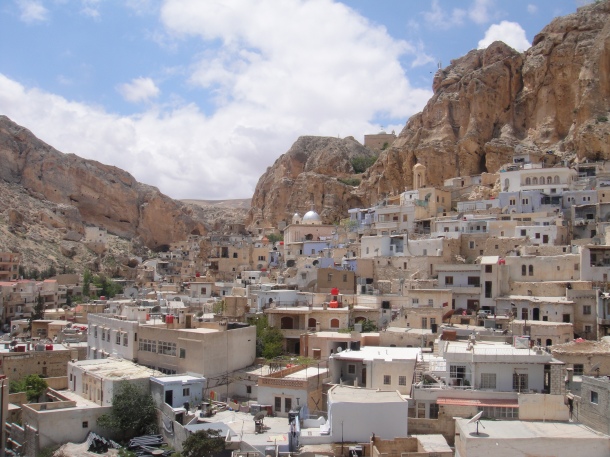 As one legend has it, after being cornered by soldiers sent to capture her, Thecla prayed to God, lightning struck the cliff and a cleft appeared in the rock face, facilitating her flight. As she ran through the passage it closed behind her, effectively locking the pursuing soldiers out.

The Convent of Saint Thecla, a sanctuary for nuns and orphans, is of minor interest, but just beyond it can be found the legendary escape route, Saint Thecla Gap. Cut through the rock by run-off from the plateau above the village, this narrow, steep-sided ravine resembles a mini version of the famed gorge at Petra:

The top of the cleft where it exits onto the plateau above Maaloula:

And a look back toward Maaloula from the top of Saint Thecla Gap… The town is just behind that ledge, but because it is pressed up against the cliffs, it is not visible from the top of the cleft.

On the road to the right is the Byzantine Monastery and Church of Saint Sergius (also known as the Monastery of Saints Serge and Bacchus). Built in 325, it is one of the oldest churches in the world. According to legend, Segius was a Roman officer who, after converting to Christianity and refusing to make sacrifices to the god Jupiter, was tortured and executed along with his friend Bacchus.

The small church on the site incorporates features of the pagan temple that previously stood there. Thus, one can see things such as the low wooden doorway (made of Lebanese cedar) leading into the monastery which is over 2,000 years old or a hole in the circular altar of the church for draining blood spilled during pagan sacrifices:

A broader view of the plateau above Maaloula:

The hillside south of the Church of Saint Sergius is riddled with small caverns that archaeologists believe were inhabited by prehistoric man approximately 50,000 to 60,000 years ago. More recently, they were used as underground places of worship and burial in the years before 313 when Constantinople permitted religious freedom: 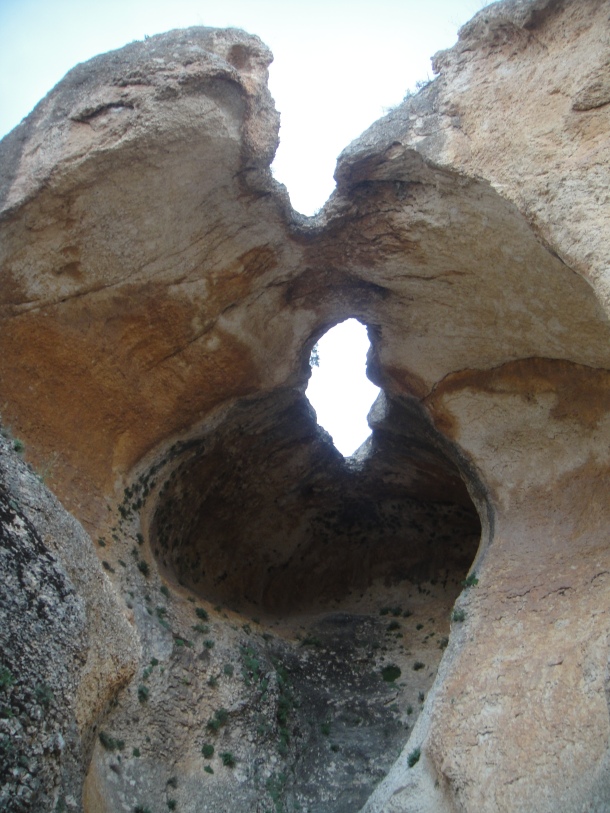 From here, the road loops back to the village and it is possible to get a close look at the way the homes in Maaloula are molded into the steep hillsides: 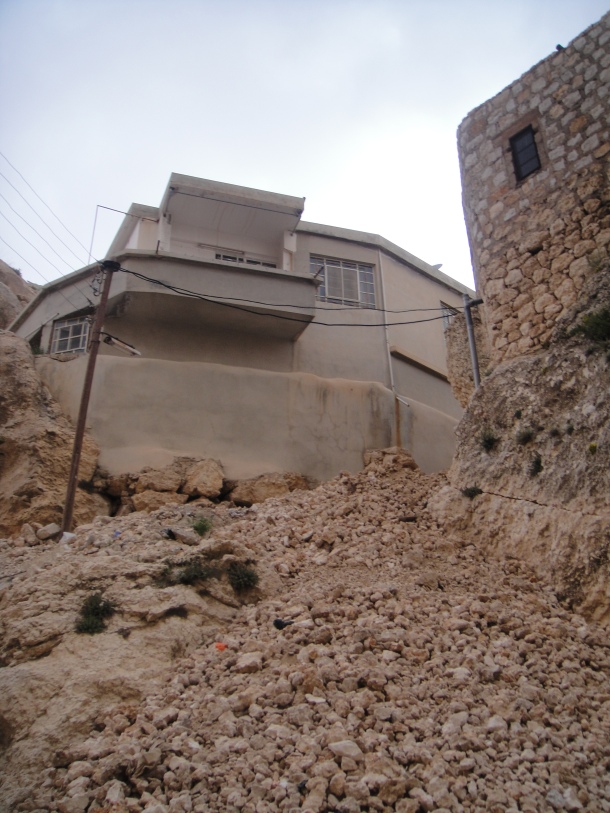 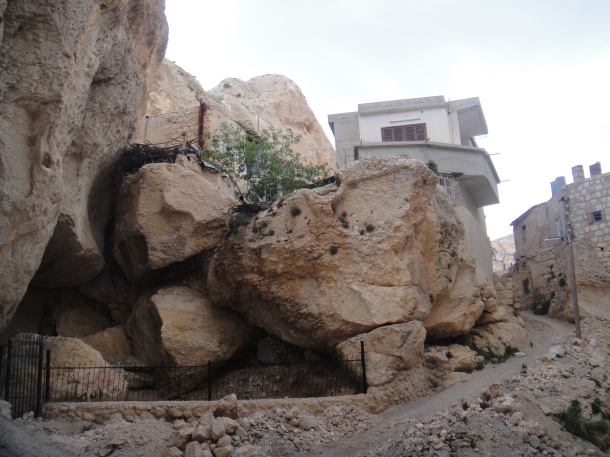