The Georgian Military Highway has existed as a route for traders and invaders since before the 1st century BC, but had only evolved into a crude horse trail by the time the Russians finally converted it, through the Herculean efforts of 800 soldiers, into a carriage road in 1783.

Today, it offers tremendous scenery and a quick route into a very interesting region of the world. Below is a map, courtesy of Stratfor, to illustrate what I am referring to:

The highway begins just outside of the Georgian town of Mtskheta, where it runs along a bank of the Aragvi River in a wide valley: 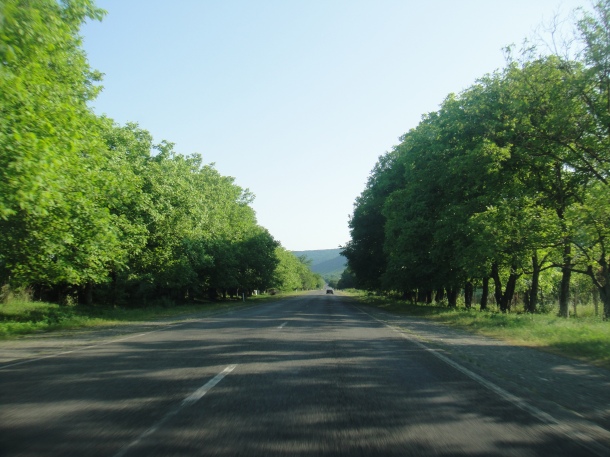 At this elevation, the road is relatively straight and is of a good quality. A number of churches and watchtowers can be seen along the way, as well as Zhinvali Lake. And, yes, the water really is that color:

It isn’t long before the highway starts heading into the Caucasus though:

A village along the way, clinging to the side of the Caucasus foothills: 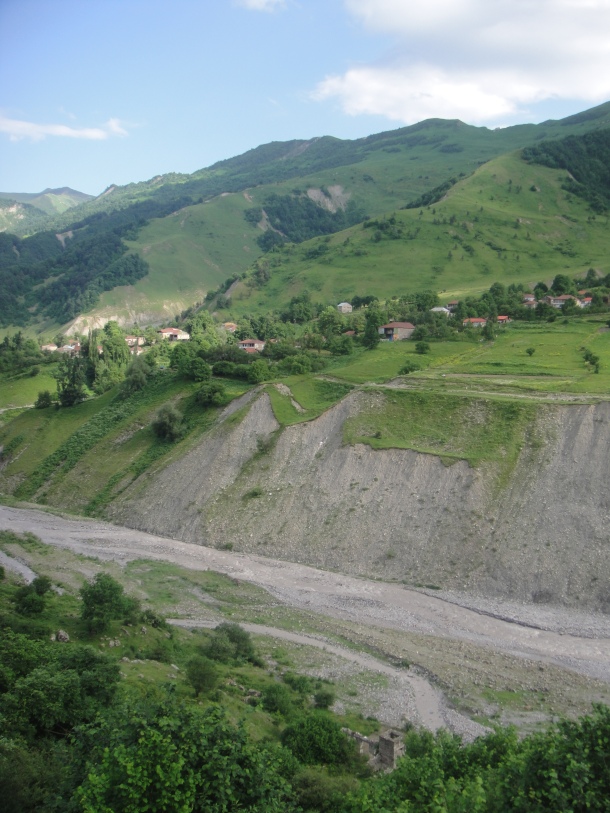 The scenery becomes more dramatic as one makes their way up through the foothills: 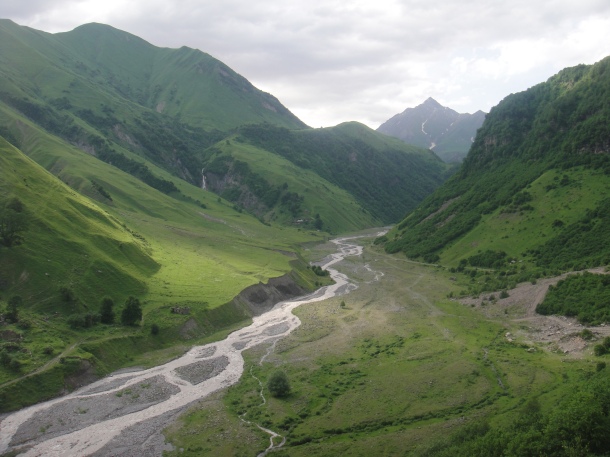 Here the road really starts to climb… In this picture, you can see 3 layers of the Georgian Military Highway created by the switchbacks working up the side of the mountain:

And at the top of this stretch, one gets their first view of the real mountains: 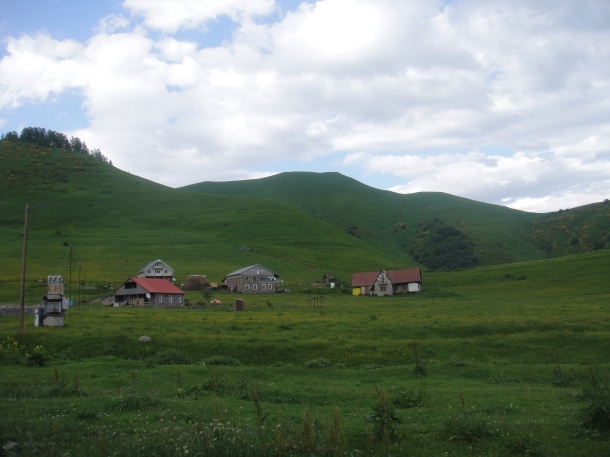 Above the village of Gudauri is Devil’s Valley (seen below), which is actually a mistranslation of Frontier Valley: 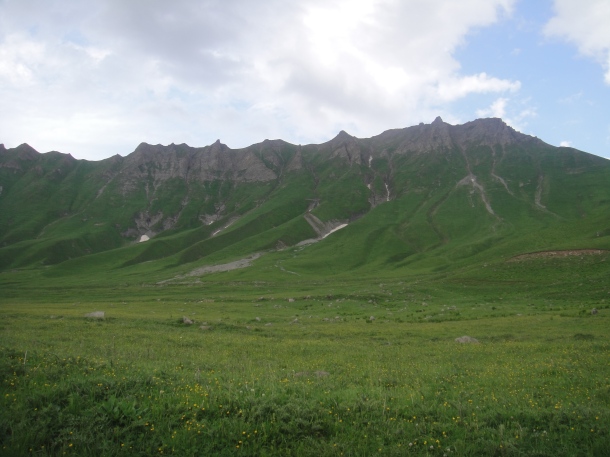 This 70m-long mural next to the highway was created in 1983 to celebrate the 200th anniversary of the Treaty of Gurgievsk… The dog survives on handouts from passers-by. We gave him everything we had, but unfortunately it wasn’t very much: 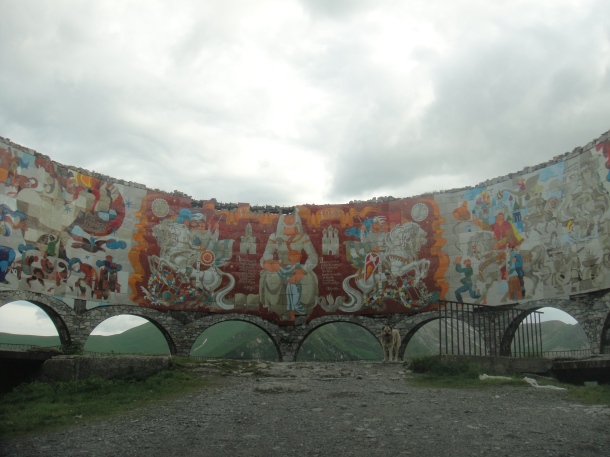 From the site of the mural, one can get a good view of the Gudaur Abyss (to the left) and of the highway (to the right), continuing its push up to the Jvaris Ughelt (or Cross Pass) at 2,379m:

Jvaris Ughelt… The highway is in a rough state through here and is only open from May to November in this section: 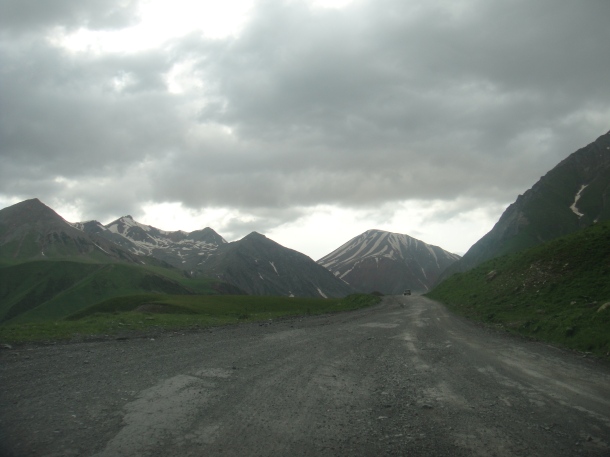 As you can see, the highway enters a broad plateau after clearing Jvaris Ughelt/Cross Pass:

This group of shepherds had set up camp on that plateau:

Those white dots on the hillside are hundreds and hundreds of sheep:

We’re starting to descend into the Bidara Valley here… The tunnel is one of a series of tunnels on this side of Jvaris Ughelt/Cross Pass used as protection from avalanches during the winter. The red rocks to the right are stained by an iron-rich spring that flows above: 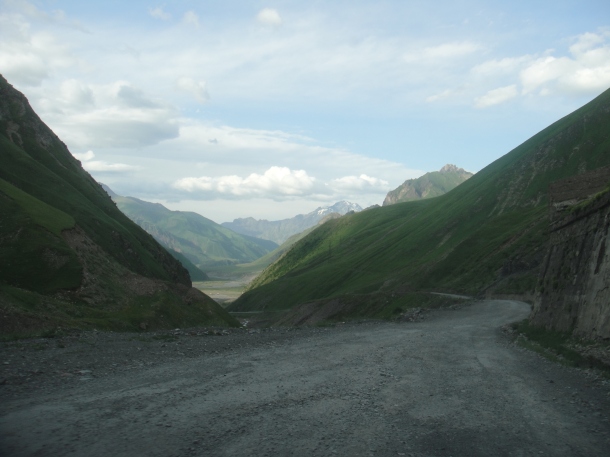 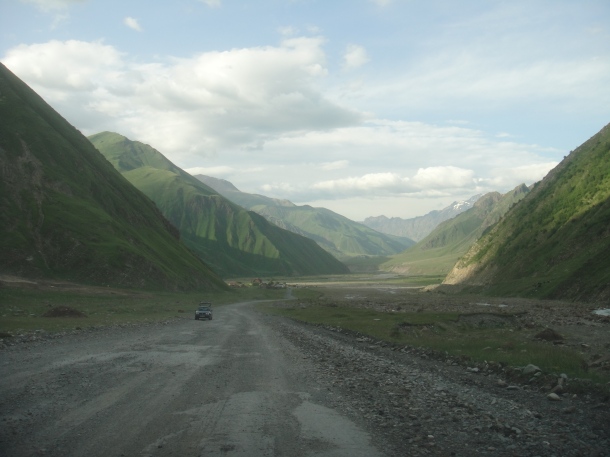 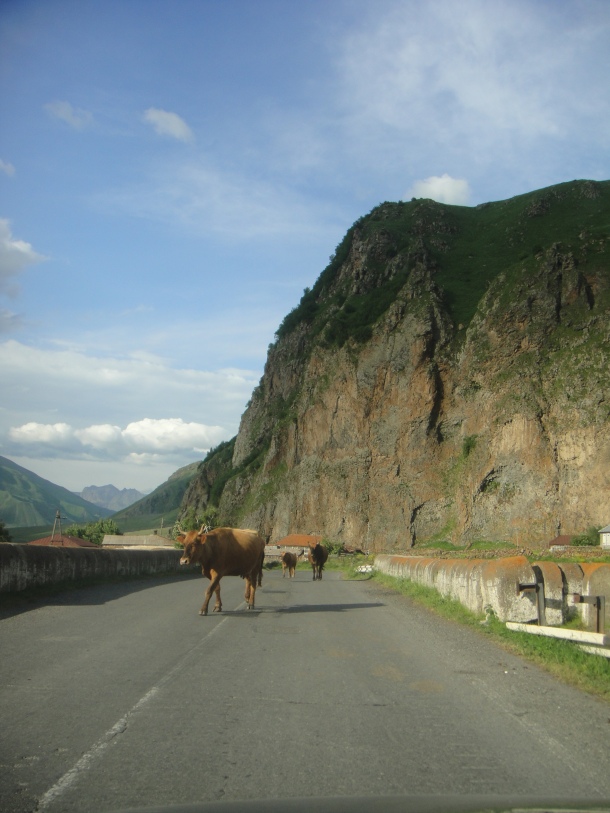 A small village high in the Caucasus Mountains:

This is the village of Stepantsminda, formerly known as Kazbegi, where we spent the night:

Stepantsminda has a population of only 4,000 and is definitely out on the frontier, so conditions can be a bit primitive. However, the town serves as a good base for exploring the area:

North of Stepantsminda the mountains become quite rugged and one can find several glaciers. It is also just a short distance to the border with Russia: 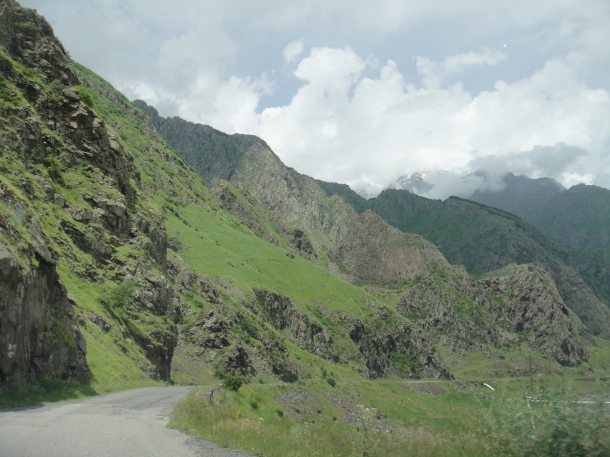 I was impressed by these basalt columns which reminded me of Devil’s Postpile National Monument in California:

The Russian border… This is the end of the line – at least for those of us without Russian visas. To the left is South Ossetia and just ahead is North Ossetia, Ingushetia, Chechnya and Dagestan:

The true end point is at Vladikavkaz in North Ossetia (Russia), making the Georgian Military Highway just over 100 miles from beginning to end. Vladikavkaz was founded in 1783 to serve as a base for the subjugation of the Caucasus, which makes it slightly ironic that it was knocked about fairly heavily during the recent Chechen wars.