In the hills of Italy’s Lazio region one can find the small town of Bomarzo. Bomarzo’s main attraction is a garden, sometimes called the Bomarzo Sacred Grove, but more commonly referred to as the Bomarzo Monster Park…

The garden takes its name from the many over the top sculptures, some carved right into the bedrock, which populate this landscape.

The Monster Park garden at Bomarzo was commissioned in the sixteenth century by Pier Francesco Orsini, called Vicino, a mercenary warlord.
Vicino inherited the duchy of Bomarzo, following the death of his father, with the assistance of Cardinal Alessandro Farnese (who would go on to become Pope Paul III).

Vicino later married a relative of Cardinal Farnese, Giulia Farnese, and was by all accounts quite fond of her.

His career as a warlord ended abruptly in the 1550s when he was taken prisoner and a treaty brought the French-Spanish wars in Italy to a close.

Upon his release, Vicino retired to his estate in Bomarzo where he surrounded himself with artists and intellectuals while actively pursuing an Epicurean lifestyle.

Upon the death of his wife, Vicino created the garden as a memorial to her. Populated by a mask of madness, fish-tailed harpies, fortified elephants, a grotto of Venus, turtles, lions, dragons and bears, it was called a “sacred grove” by its creator.

The design has been attributed to Pirro Ligorio, a famous architect of the time.

Vicino’s creation was anything but ornamental – it was intended to astonish rather than please….

Constructed with images and ideas, the symbolism contained within the garden and its statues can be read by the enlightened visitor like a book, providing a philosophical journey through themes such as love, death, memory and truth. Vicino’s garden-book is, however, obscure and ambiguous, and requires a knowledge of poets such as Dante, Petrarch and Ariosto to unravel; every reading produces a different set of ideas that reflect the complex personality of Vicino himself.

During the nineteenth century and well into the twentieth, the garden became overgrown and neglected, but in the 1970s a program of restoration was implemented by the Bettini family (the owners of the property).

This is how a tour of the gardens looks today…

The Mask of Madness… It is speculated that this may be Proteus, or Glaucus, a fisherman who became a sea god after eating a magic herb (although he is not alone in thinking he was a god after consuming “magic” herbs): 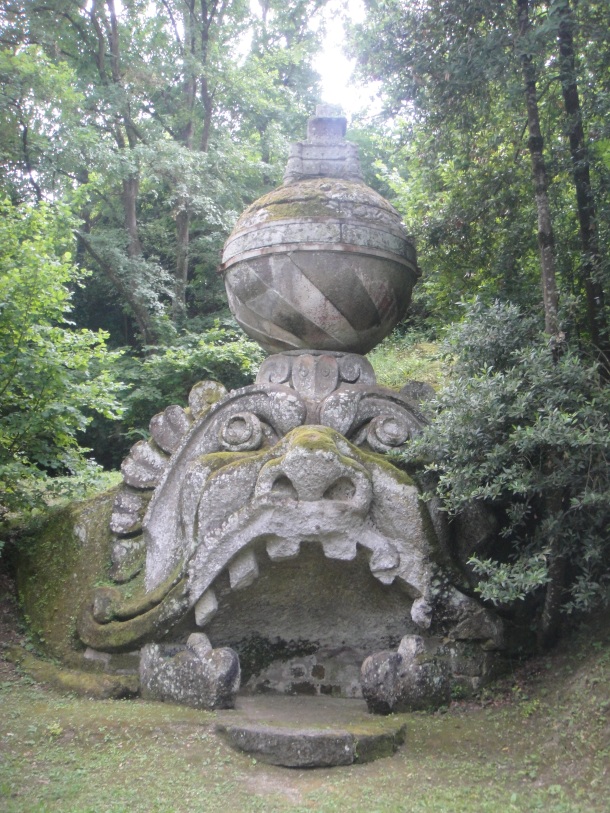 The Wrestling Colossi… Carved from a single, massive block of stone, the meaning of these colossal figures, one apparently ripping the other in two, has been lost for centuries. Some have connected the figures with the hero of the poem Orlando, who, driven mad at the loss of his beloved Angelica to another man, comes across two woodsman while wandering through the forest, one of whom he slaughters by exactly the method depicted here – he catches him by the legs and tears him in two:

The Giant Turtle features a winged woman on its back… Though the meanings of the statues in Vicino’s garden were consciously determined this was not always the case with their placement; they were often carved directly from large stones as they were found in the landscape:

This giant set of jaws erupting from the earth is presumed to depict a whale:

The structure you see here is referred to as the “Hanging House” or the “Twisted House” and, yes, it really is leaning that much: 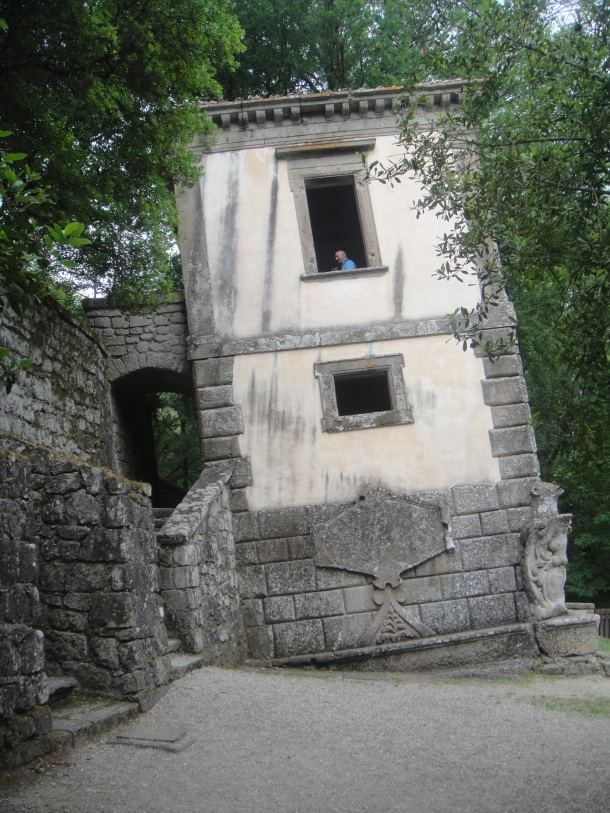 The front of the leaning house:

Yes, he is playing a trumpet. I don’t know who he is, but he was wandering around the gardens while we were there, playing the trumpet the whole time. It was a nice touch: 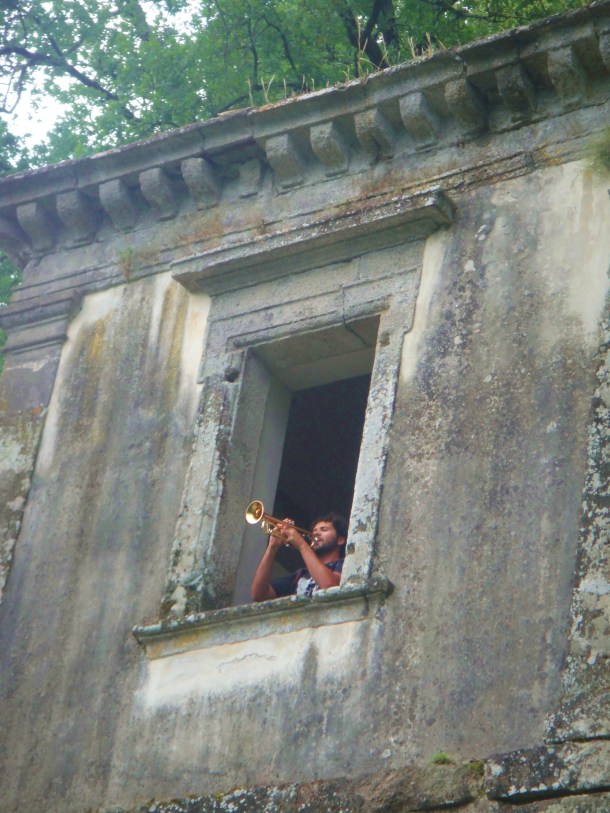 The Mouth of Hell… Also referred to as the “Ogre” – Dante’s phrase “every thought flies away” is engraved on the mouth:

A dragon fighting two lions… Or two dogs. It depends on whom you ask:

The War Elephant… Thought by many to represent Hannibal’s elephants that he brought over the Alps, the elephant can be seen catching and crushing an unfortunate Roman legionary: 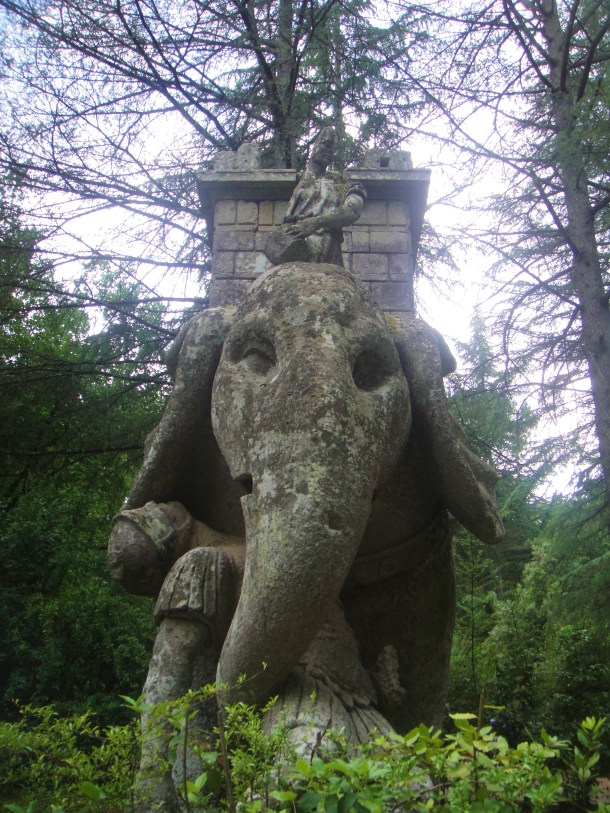 This one is easy – Cerberus, the three-headed dog which guards the gates of the Underworld: 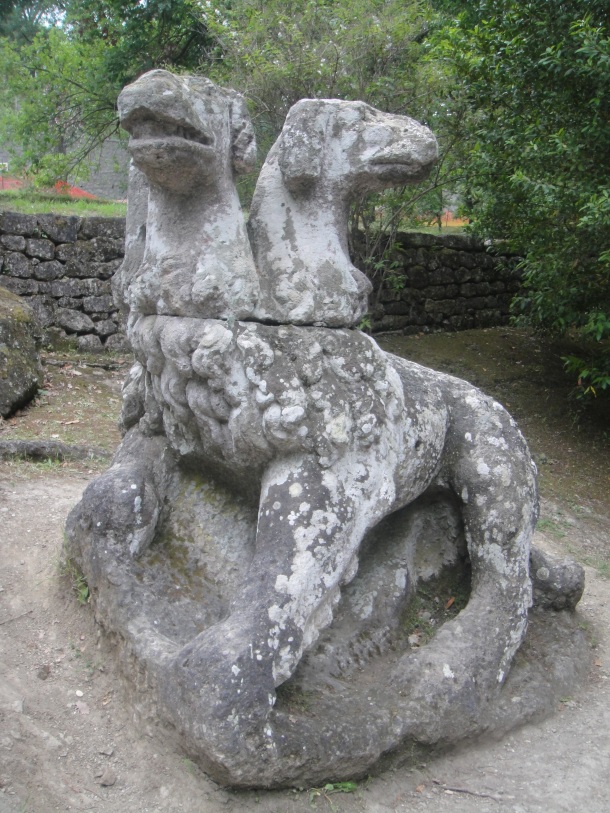 Echidna, half woman and half snake… Others have interpreted this as a mermaid:

And across from Echidna on the same terrace, a harpy… This sculpture is also referred to as “the Winged Fury”:

Others still have argued that both of the girls on the terrace are harpies.

There are many other monsters which I have not posted here – not because they are not worth posting, but because I did not take worthy pictures of them.

If one is in the north of Lazio, the gardens are certainly worth a visit to see the rest of the monsters.

If you would like to know more about the symbolism of some of the monsters, the Courtauld Institute Of Art has a published a short article on this subject here.

One thought on “The Bomarzo Monster Park”