I still remember our teacher, Joe Gledhill, describing the discovery of the Dead Sea scrolls to us in the fourth grade at Dobbins Elementary School. After all, it is a memorable story (and one that he told well) – the Bedouin shepherd boy searching for a stray goat and discovering the scrolls inside earthenware jars in a cliffside cave at Qumran in 1947…

The story stirred my imagination and when that occurs, I usually want to visit the site that had that impact on me. Obviously, it isn’t enough for me to hear about it or see pictures of it. I want to see it from the perspective of those that were there. I want the full sensory experience – sights, sounds and smells. I want to look in the nooks and crannies and explore perspectives and angles that most probably do not. I want to consume it.

Perhaps unfortunately, when I want to visit some place, it usually happens. Not always right away, but it usually happens… So, it may have been a few years since I was in the fourth grade, but I did not forget about Qumran and when the opportunity to visit presented itself, I chose not to miss it.

The first thing one will encounter are the ruins of the Qumran settlement… The ruins are not that extensive, but one can clearly make out an aqueduct, channels and cisterns that ensured the community’s water supply. Elsewhere are what are said to be baths as well as a common dining area and a pottery workshop with kilns: 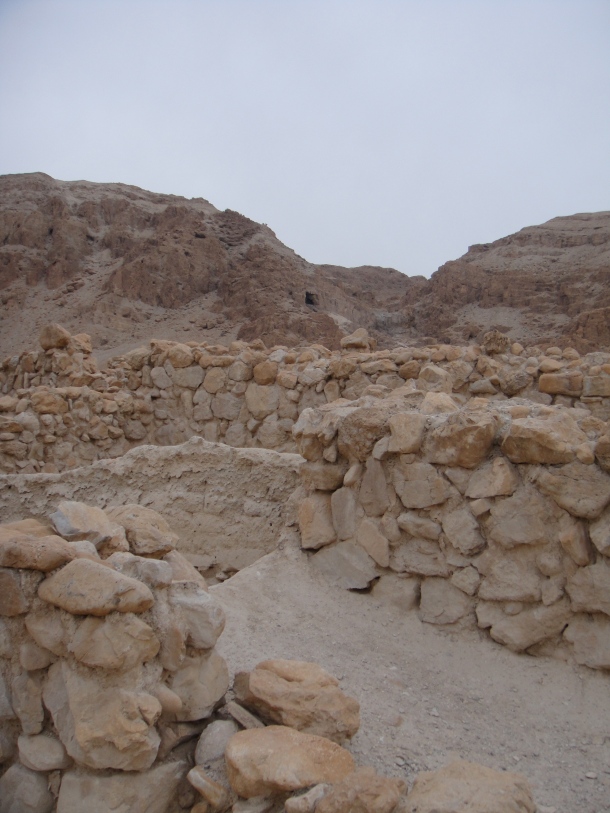 What exactly Qumran was and who lived there is a subject of much debate. After early excavations at the site, it was swiftly concluded that the Essenes – members of a strict Jewish sect – had lived there in a monastery and presumably wrote the scrolls in the first centuries B.C. and A.D.

However, that view is increasingly being called into question…

In the decades following these initial conclusions, a number of alternative theories have been put forward ranging from the Qumran site simply being a pottery factory to a fortified villa or even possibly an agricultural community or a trading post.

Whatever it was, the Romans destroyed it in A.D. 68 during the Jewish revolt.

Nevertheless, the Essenes were interesting and certainly many still believe they were present at Qumran and were responsible for the Dead Sea scrolls. That being the case, I will briefly describe them here: In short, the Essenes do not sound as if they would have been much fun to hang out with… The Essenes were a breakaway Jewish sect who believed they were the “chosen people” of Israel. They moved to the desert in about 150 BC to escape the liberalism and decadence they believed was corrupting their fellow Jews. The Essenes were celibate and were very serious about ritual bathing and purification. For example, to avoid impurity, they did not even shit on the Sabbath no matter how badly they needed to go….

Very near to the Qumran settlement is the cave described above, in which the Bedouin boy was searching for his goat… It is known pragmatically as Cave #4: 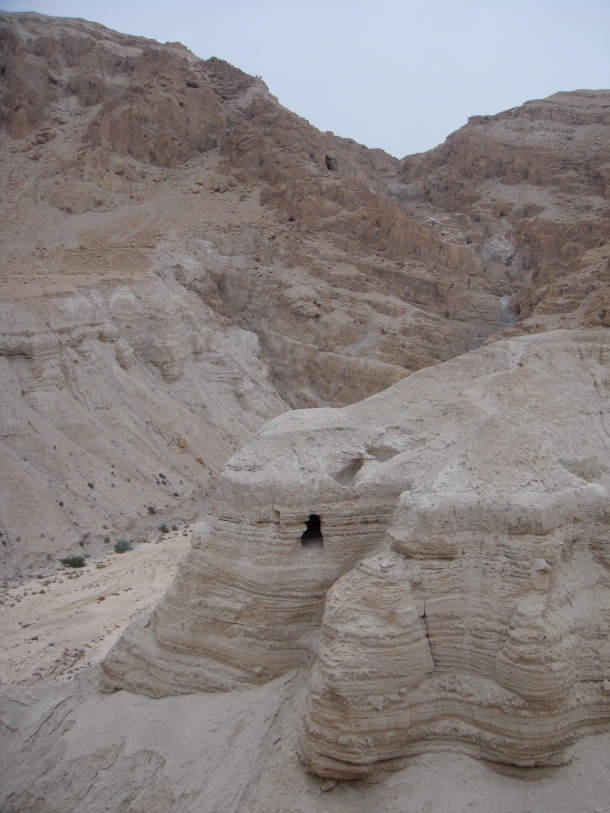 I always wondered if the lost goat was ever found? Does anyone know the answer? And who was the boy that found the scrolls? Is he still alive?

Now, you see that area behind me in the picture below? There are a lot of caves up there… Those caves are important and I intend to use them as a segue…

What most people don’t know is that only the first several Dead Sea scrolls were discovered in Cave # 4. Over the next few years, from 1949 to 1956, additional fragments of some 950 different scrolls were discovered in the caves pictured behind me, both by Bedouins and by a joint archaeological expedition of the École Biblique et Archéologique Française and the Rockefeller Museum. Since that time, no further discoveries have been made (although not for a lack of effort on the part of archaeologists).

The caves are important because they tie into the problem with the theory about the Essenes being present at Qumran or responsible for the Dead Sea scrolls… There is no archaeological evidence that Qumran had anything to do with the Essenes or a monastery or the scrolls or was, in fact, anything other than a pottery factory.

In addition, the mixture of Jewish religious ideas and practices recorded in the scrolls make it seem unlikely that they were the work of a single sect like the Essenes. Only a few of the texts deal with specific Essene traditions and not one espouses celibacy, which the Essenes practiced.

Some argue, convincingly in my opinion, that the scrolls in the caves were probably written by many different groups and were removed from libraries in Jerusalem by refugees in the Roman war. Fleeing to the east, the refugees may well have deposited the scrolls for safekeeping in the many caves near Qumran.

Qumran in those days was at a major crossroads of traffic to and from Jerusalem and along the Dead Sea. Similar scrolls have been found at Masada (the clifftop site, south of Qumran, of the dramatic and suicidal hold-out against the Romans).

It is also known that refugees in another revolt against the Romans in the next century fled to the same caves. The caves are literally the last spot one could hide the scrolls before descending to the shore of the Dead Sea.

The jars in which most of the scrolls were stored probably came from the pottery factory. If so, this may prove to be the only firmly established connection between the Qumran settlement and the scrolls: 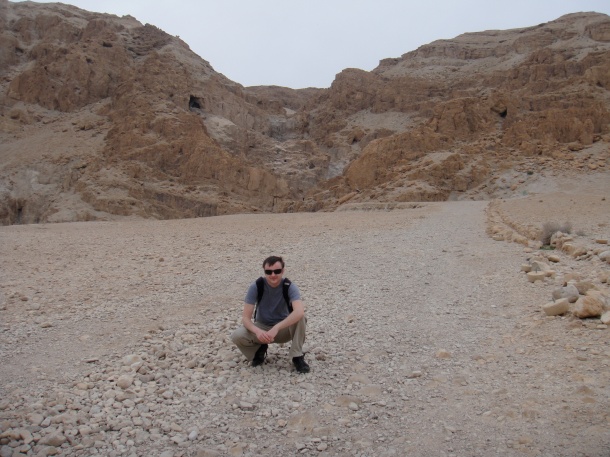 Next to me are the remains of the aqueduct that brought water down to Qumran: 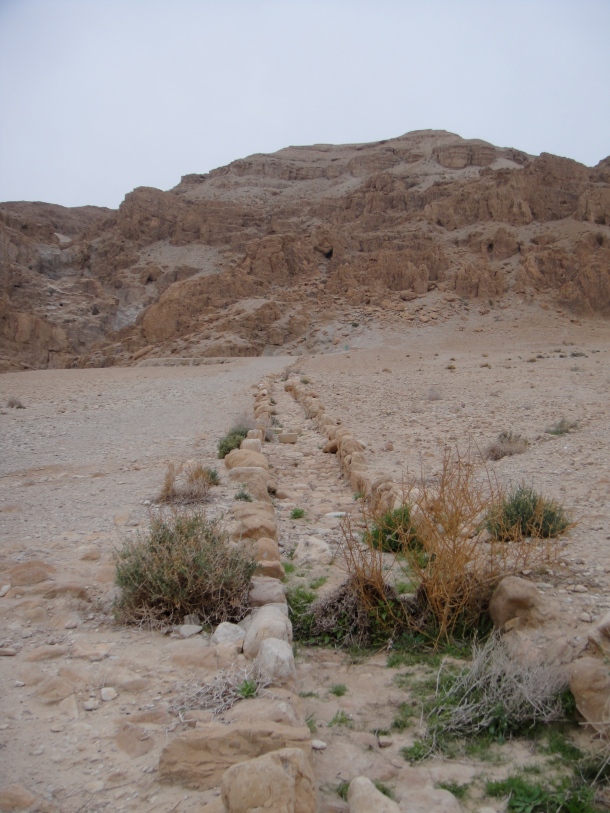 This gorge – known as Wadi Qumran – runs next to the settlement. It is almost always dry, but once or twice a year tremendous flash floods roar through this channel. What that means is that the residents of Qumran (whoever they were) were compelled to collect a year’s worth of water in a matter of hours – hence the need for the elaborate aqueduct and cistern system.

To take this picture, I am standing on the lip of a waterfall (dry when the picture was taken) that drops several hundred feet down to the floor of the gorge: 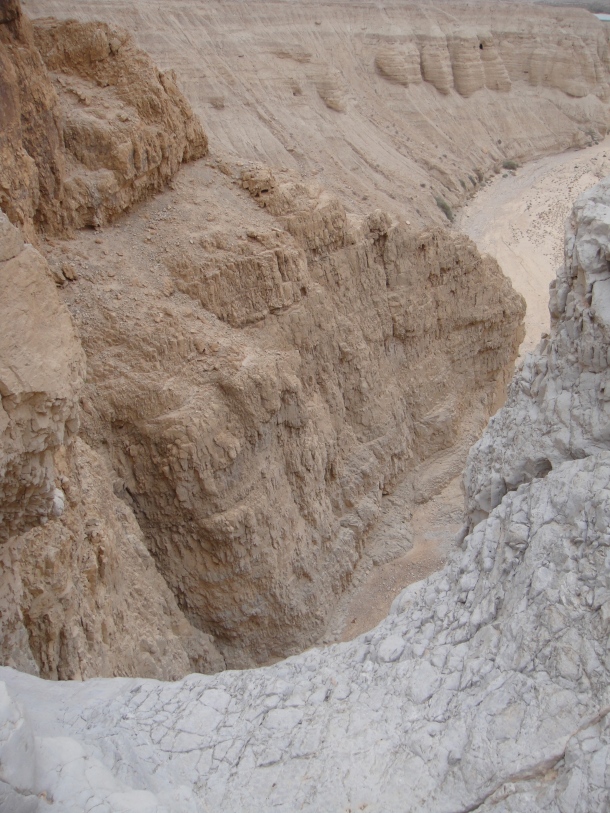 It wasn’t easy, but I started climbing the cliffs the water flows over during the floods… Looking down on my Italian interpreter shortly after I started: 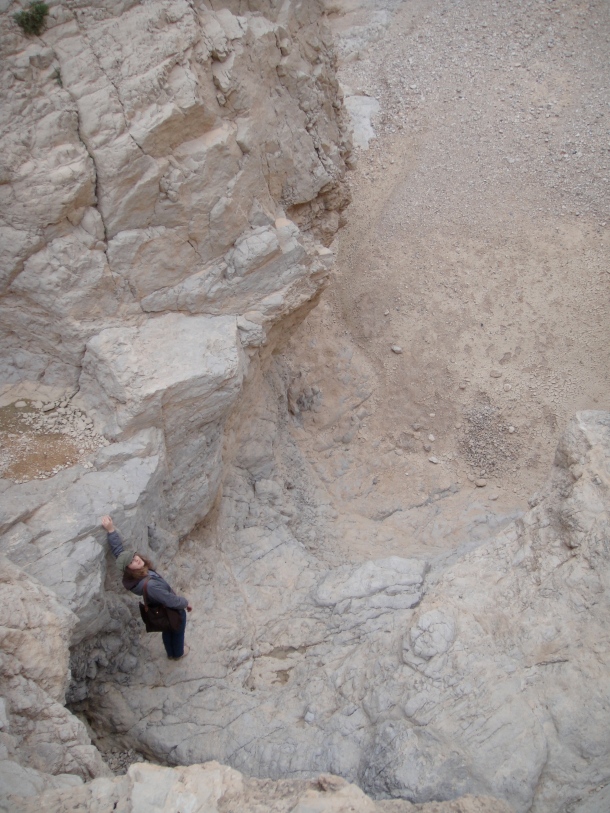 Making my way up the cliffs, I discovered several hidden pools of water: 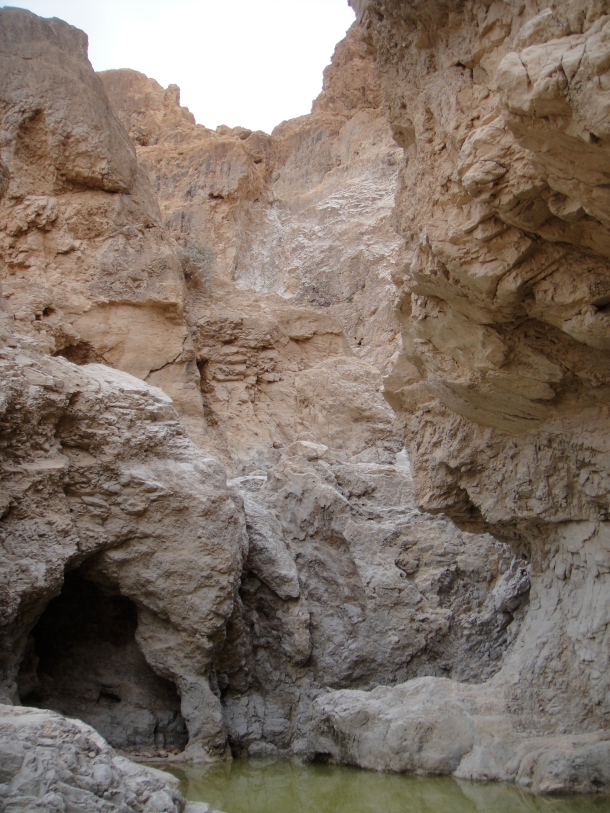 Given the scant amounts of water and the brutal heat, I have always respected the hardy plants of the desert. That is particularly the case in the Dead Sea area… It’s too bad that George Hartwell isn’t around to see these: 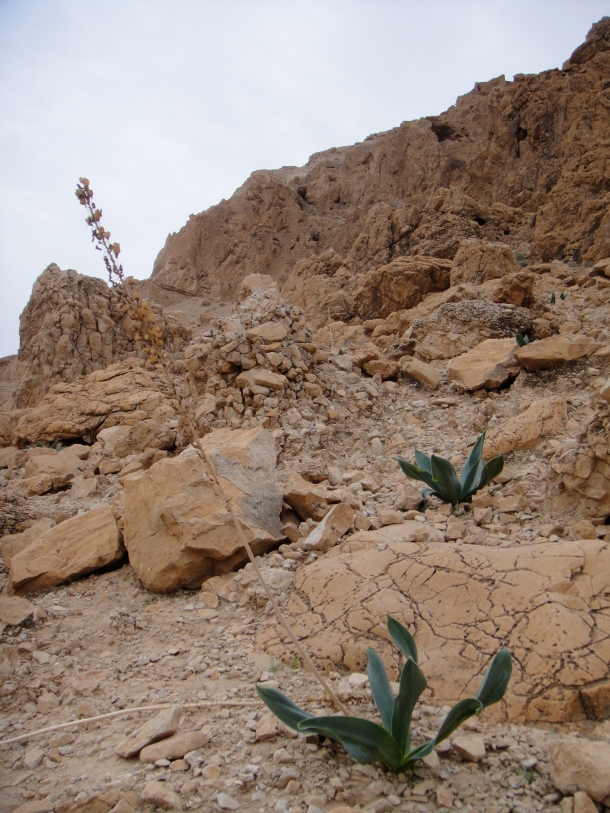 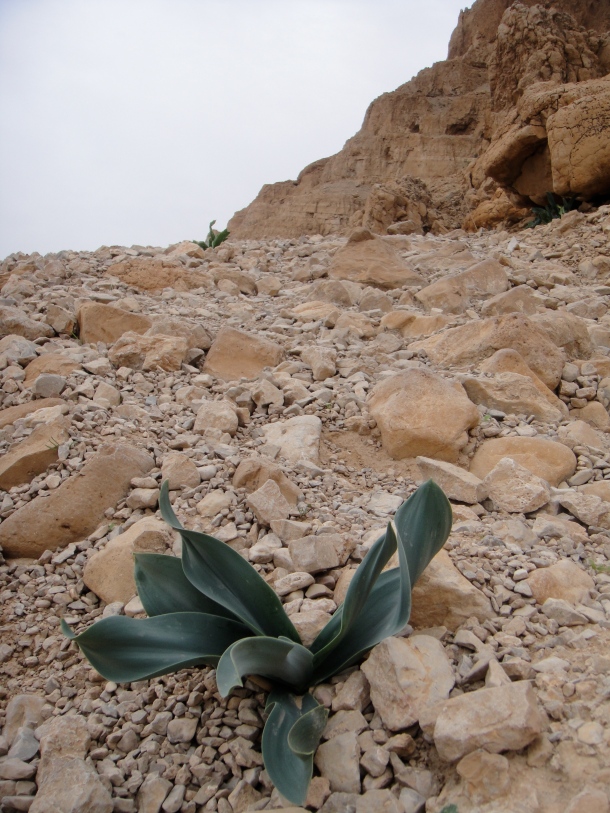 Climbing up the cliffs also provided a good perspective on more of the caves in the area: 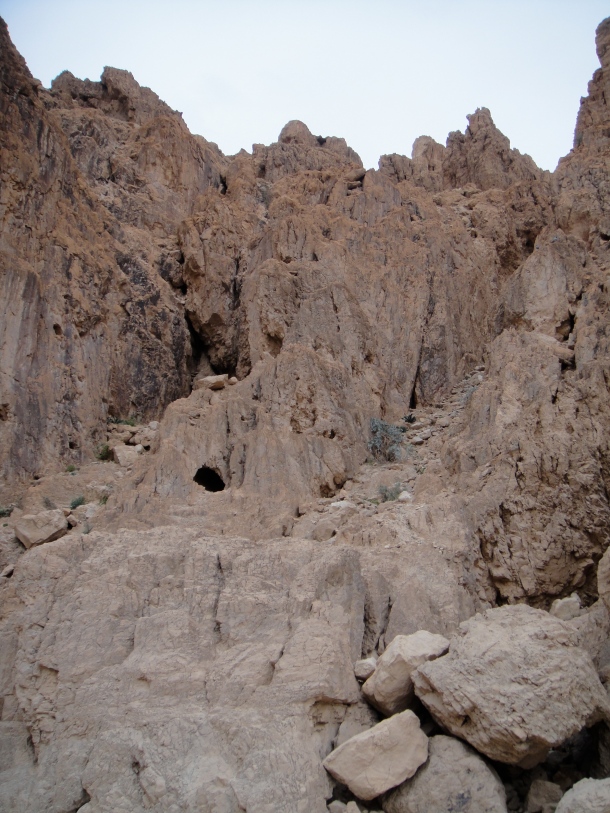 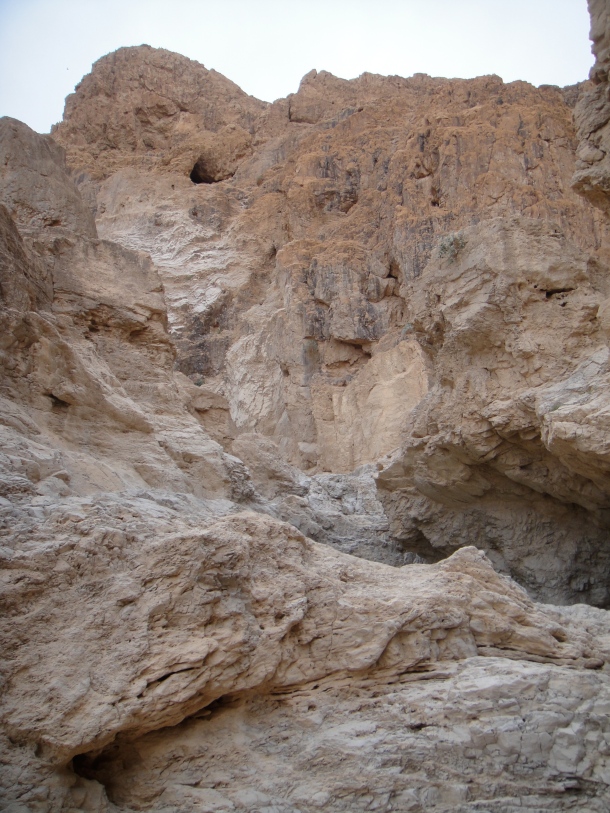 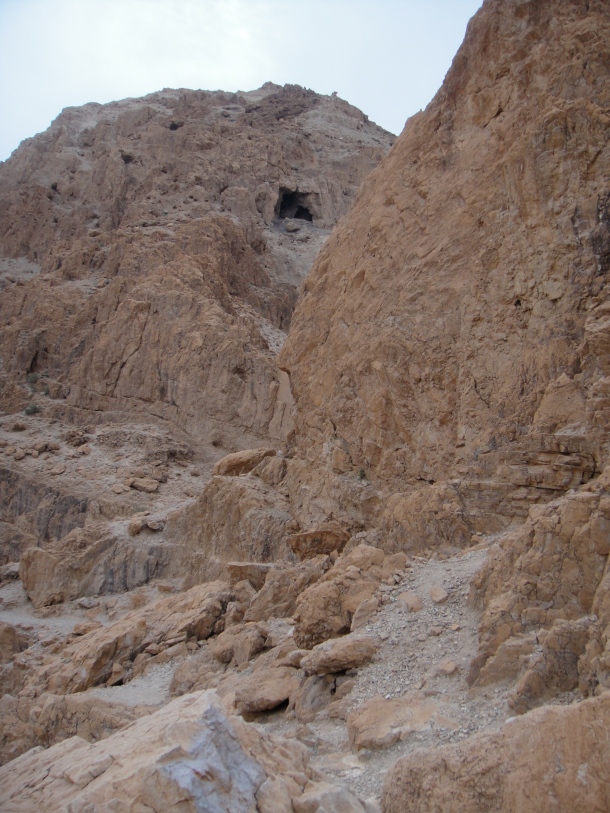 And when I was coming back down, I was able to access the upper reaches of the aqueduct – where it starts – and to crawl through it until a section where it had crumbled away and I was forced to descend to normality.

The start of the aqueduct: 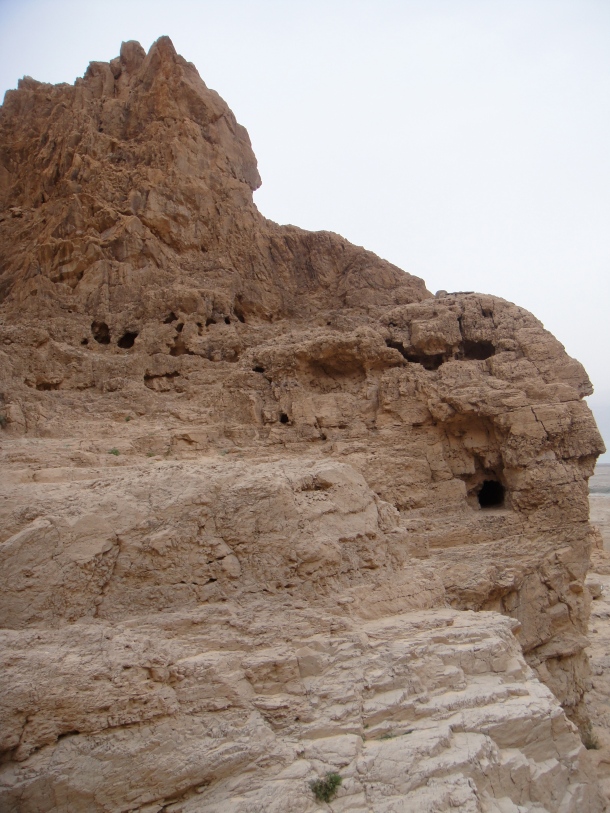 The tunnel I crawled into: 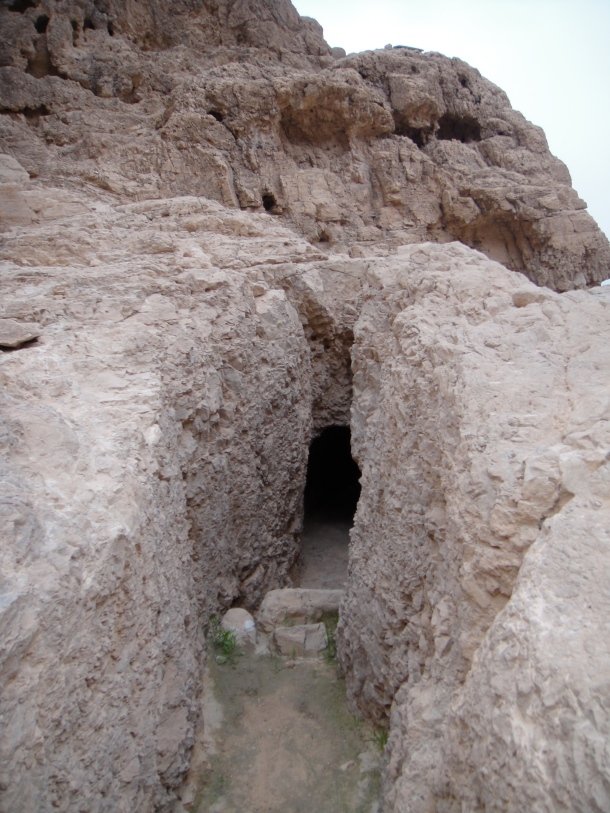 Looking through a collapsed section of the tunnel down to Wadi Qumran: 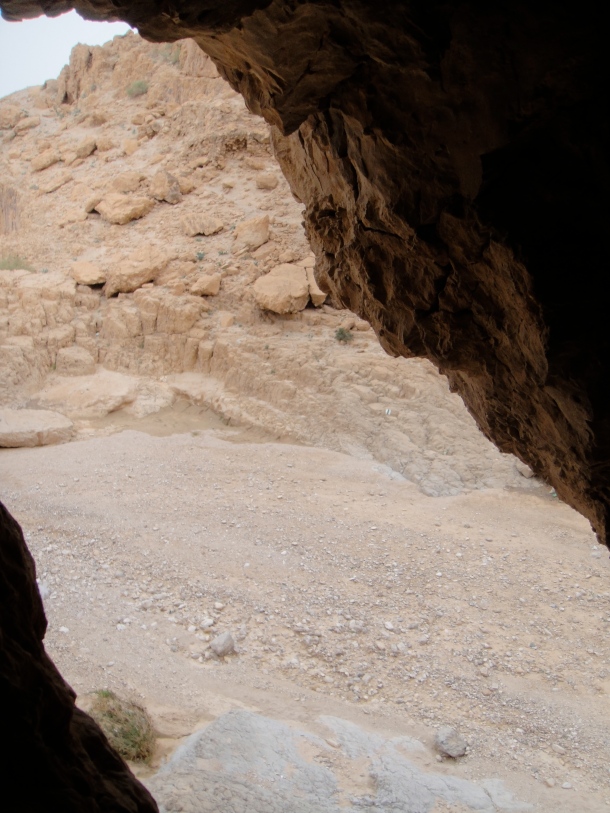 Filled in with debris, this is the last section of the aqueduct I was able to follow before being compelled to descend: 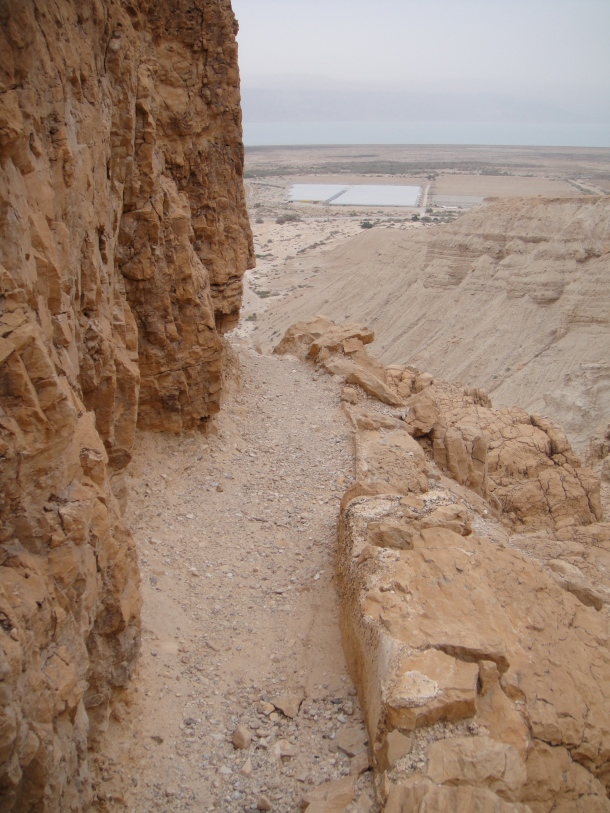 No matter who wrote them or where they came from, the Dead Sea scrolls can be viewed today at Jerusalem’s Israel Museum.

3 thoughts on “Qumran And The Dead Sea Scrolls”