It gets hot out here…

Situated on the edge of the Taklamakan Desert near Turpan, the Flaming Mountains are well named, if nothing else, for how hot it gets here… In the summer temperatures are routinely over 122 F (50 C). Supposedly, the optical illusion of shimmering light created by the heat rising off the ground above the gullies and trenches gives the mountains an appearance of being in flames as well.

I’ll have to take the word of others on that one, but I can confirm for you that it is brutally hot.

For those of you that might be curious, I have linked to the site in Google Maps in the next sentence so that you can see where I am talking about… Those mountains in the middle of the map? The Flaming Mountains.

The picture below was actually my first view of the Flaming Mountains… I didn’t touch the settings on this photo. It really is that bleak and washed out in the noon sun. It reminded me of Death Valley in California:

Driving through the Flaming Mountains: 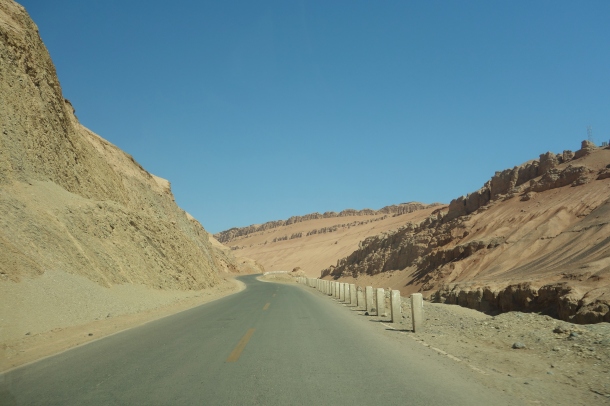 It is a stark landscape… This is a tough place for life to exist:

The Chinese, of course, have their own legends about the mountains, but the Uighur story is that a dragon lived in the area that would prey upon the locals, particularly children. One day a Uighur hero marched out to meet the dragon in combat and was successful in killing it – so successful, in fact, that he cut it up into eight pieces. These eight pieces of the dragon are said to make up the structure of the Flaming Mountains today and the red appearance of the mountains is said to simply be the dried blood that was splashed about during the process of slaying the dragon.

It seems like a lot of blood to me, but I also don’t have a lot of experience in slaying dragons: 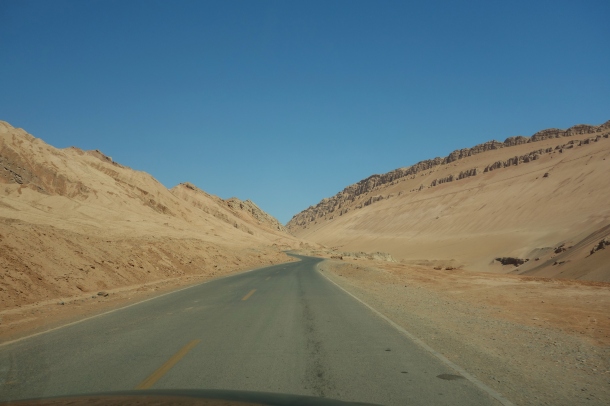 Personally, I don’t think you have to be Elena to find these stark landscapes quite beautiful… In this picture, you can get a good view of the rich color (from the dried dragon’s blood, of course) of the mountains:

As can be seen from the pictures above, it is pretty isolated out here… Those instances of human activity that one does see usually involve something that has been abandoned: 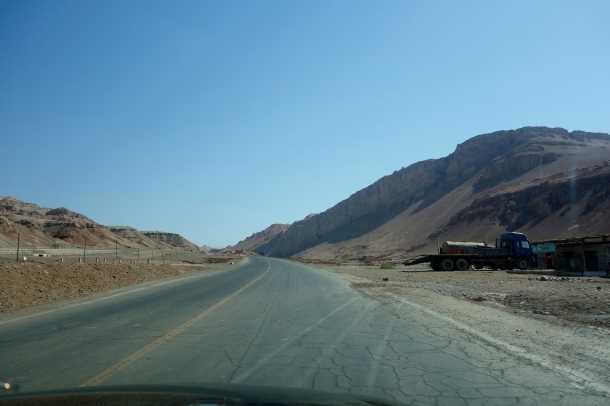 Amazingly enough, however, there is actually a small amount of water to be found out here. Even more amazing is the fact that there are a few small farms successfully clinging to the edge of that water in the middle of one of the most inhospitable environments on the planet:

2 thoughts on “The Flaming Mountains”