No visit to Palestine would be complete without a visit to Ramallah. The stated ambition of the Palestinians is to have their capital in East Jerusalem, but for now, Ramallah is the de facto capital of Palestine.

I’ve already shown you Yasser Arafat’s tomb whose surrounding buildings serve as the home of the Palestinian Authority and I’ve shown you a Palestinian refugee camp within Ramallah. So, this post will focus on the city in general… Actually, with an estimated population of no more than 50,000 is Ramallah more of a town than a city?

Either way, Israeli law makes it illegal for Israelis to visit Ramallah, but the rest of us can…

It is easy to go from Israel into Ramallah by car, bus or shared taxi, but going from Ramallah back into Israel is a grueling process.

On our first visit to Ramallah, we took a bus from Jerusalem and were dropped off along this street – Al Nahda Street – which is one of the main streets in Ramallah… Al Nahda Street leads down to Al Manra Square, which one can see in the distance: 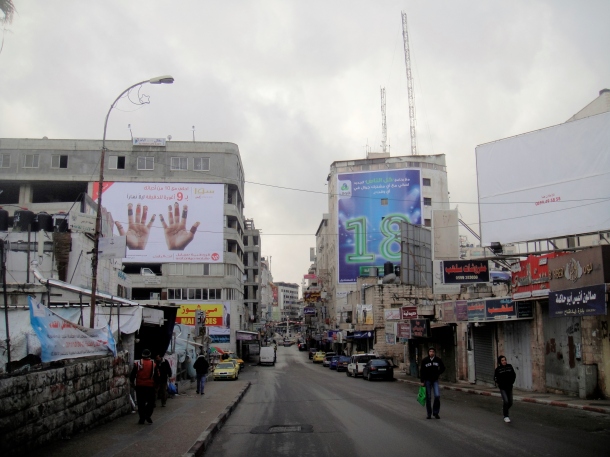 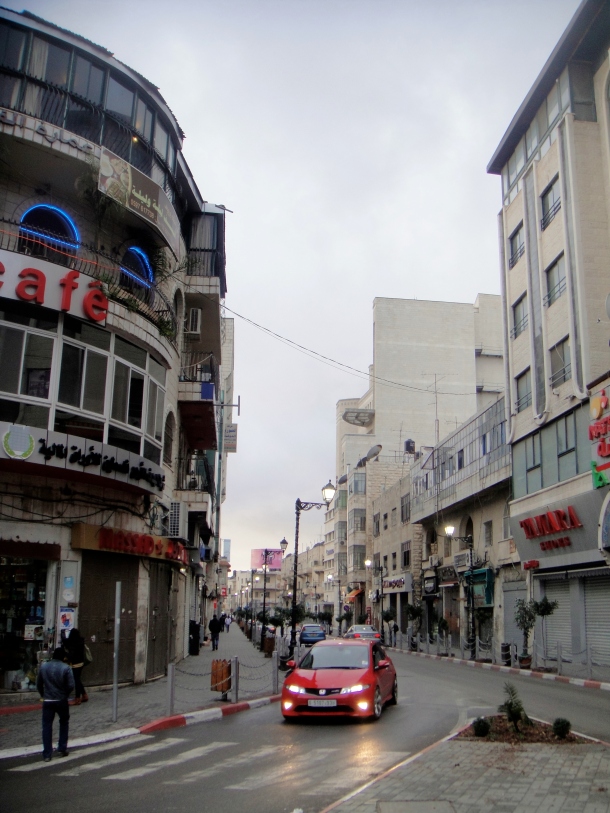 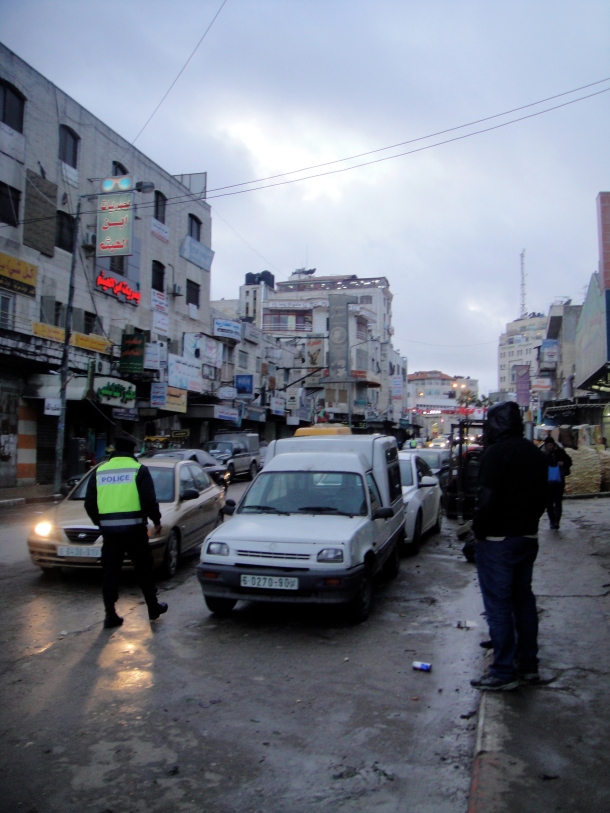 This bread pictured below – ‘kmaaj’ or pita bread – is one of the staples in Ramallah and, as such, it can be found cheaply at many bakeries… It is similar to the simple bread served with every meal in Afghanistan and I am quite fond of it:

A bakery that placed its bread, still hot from the oven, out for sale:

On one edge of the downtown area is the “hisbeh” produce market (although I have also heard it referred to as the Al-Bireh Central Vegetable Market): 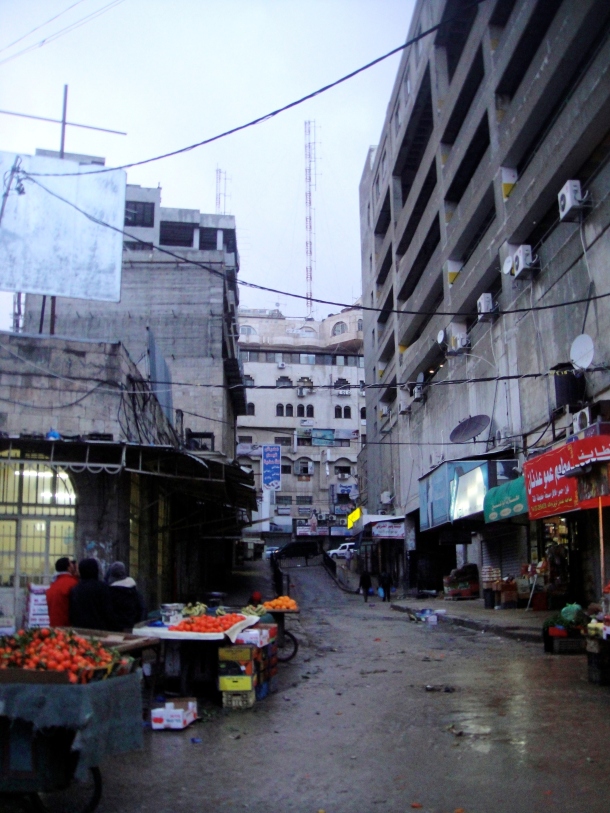 The produce market is a great place to visit as one can find fresh fruits and vegetables at good prices and there are always interesting things to see. These guys in front are burning wood scraps to stay warm. Contrary to popular impression, it gets extremely cold here in winter:

More of the “hisbeh” produce market: 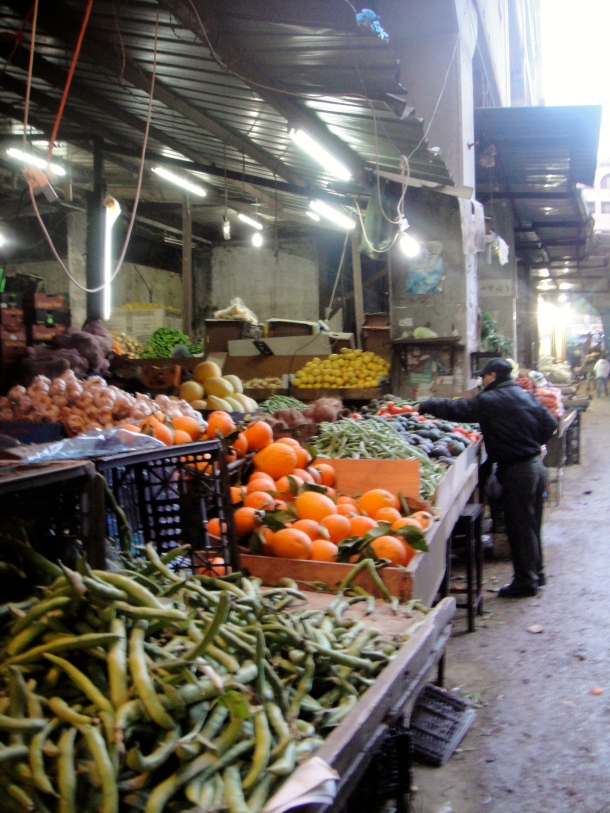 Away from the downtown area, the suburbs of Ramallah have a certain sameness to them: 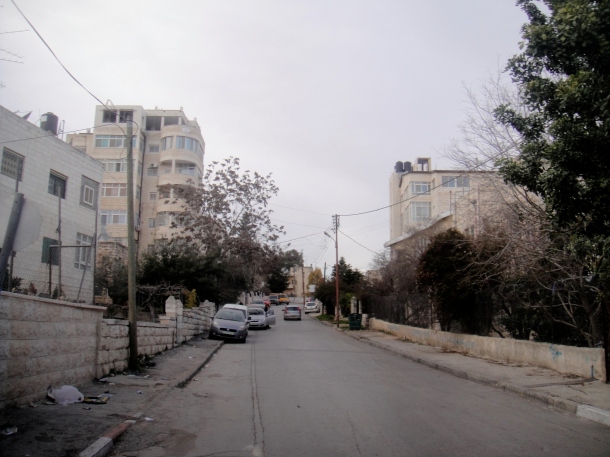 However, this is not the case when one goes the other direction on Al Nahda Street toward the governmental and diplomatic quarter. Many foreign nations have located their diplomatic missions to the Palestinian Authority in Ramallah such as Australia, Poland, Austria, Germany, Korea, Norway, Switzerland, Portugal, The Netherlands, India, Russia, Jordan, Brazil, Finland, Denmark, Ireland, Japan, China, the Czech Republic, Canada and Mexico to give just some examples.

There are also many international NGOs focusing on Palestine that are headquartered in Ramallah.

And, naturally, like moths to an expense account flame, one will find plenty of these guys as well: 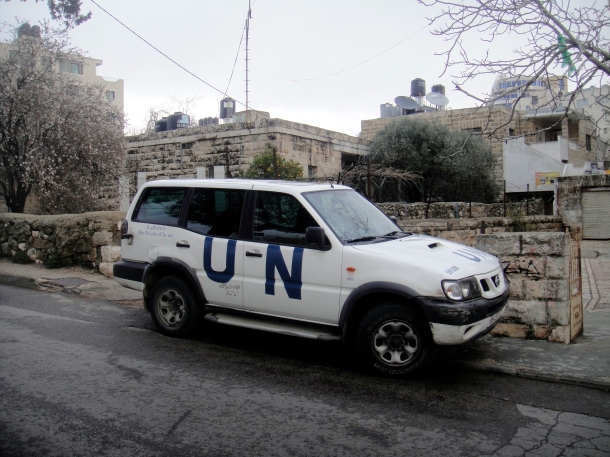 Naturally, these representatives of their respective governments, the UN and the employees of the NGOs are to be found occupying the poshest homes in Ramallah: 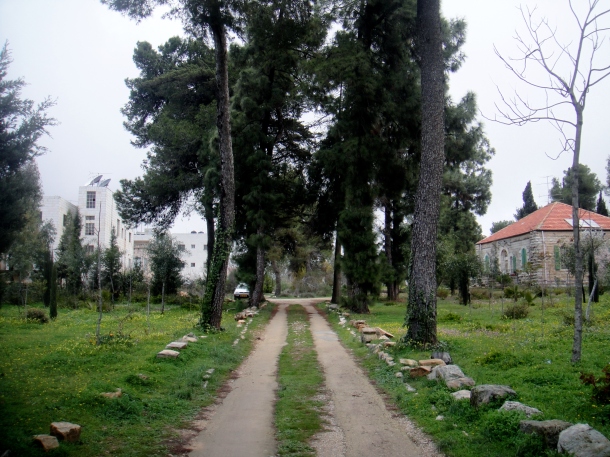 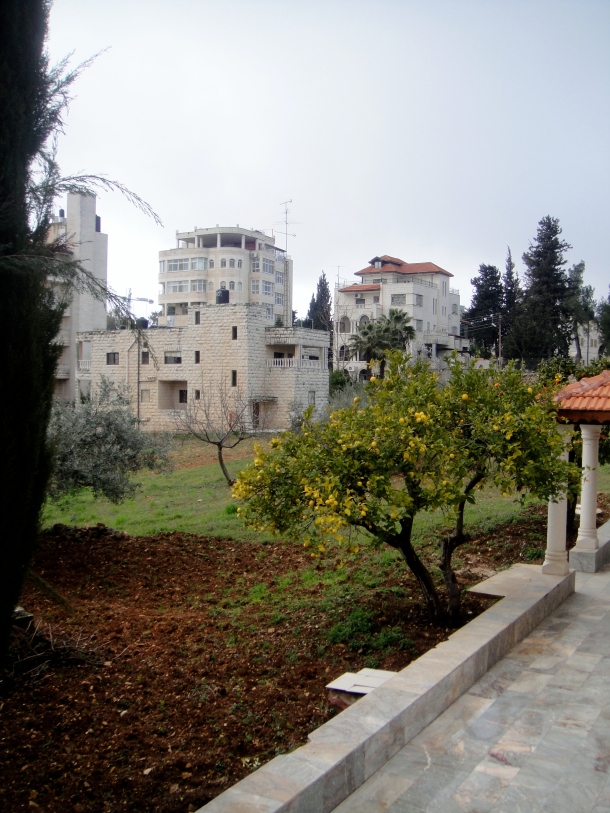 Of course, those connected to the government of the Palestinian Authority look out for themselves as well (some things are the same everywhere). With hundreds of millions of dollars in aid money flowing in, there’s plenty to go around. This gentle skimming of funds combined with the lavish expense accounts enjoyed by the UN and other foreigners has contributed to something of an economic boom in Ramallah over the past several years.

Unfortunately, this has driven the costs of some things – such as hotel rooms – to extremes. As a general rule, one can expect to pay too much for their hotel anywhere that the UN is well established – such as the capitals of Kosovo, Haiti or Palestine.

I am frequently asked about the worst hotel experience The Velvet Rocket staff have experienced on their travels. Many people assume it was the bloody mattress and biting insects at a mud hut in Sudan (a popular story of ours), but the worst hotel we have ever stayed in was actually in Ramallah. Now, for thuggish behavior and violence, the Grand Hotel in Pristina, Kosovo takes the top spot, but for the room itself, the prize of “worst” goes to Ramallah.

Now, regrettably, I have forgotten the name of the hotel in Ramallah as remembering the name did not seem important at the time, but I will do my best to describe the experience…

The room was on the 6th floor and, naturally, there was not an elevator. That’s fine since exercise is good for us, but there was also no electricity in the stairwell and so we (or anyone else) were compelled to struggle up in the complete darkness, counting floors by the landings, until arriving at the designated floor. Then we would have to feel our way along, counting doors, until arriving at what should be our room. This was not an exact science though and so it usually took a couple of tries until the lock that worked with the key in our possession was found.

Upon entering, we were greeted by a bleak, dimly lit room with cracked walls and a torn plastic tarp covering the only window. The glass in the window itself was smashed out and with the torn tarp, cold air from outside blew in without restriction.

The room did have running water, but in only one temperature – boiling. I’m not exaggerating. The water would still be bubbling when it came out of the tap. This made washing one’s hands and just about anything else – such as showering – impossible. As a silver lining, this made the fact that there were no towels a moot point.

But there was something else that was interesting about the shower too… There was no basin or tub or any sort of barrier at all to catch the water streaming out of the shower head. So, all of the water would just pour onto the floor of the bathroom and from there, it would flow off into the hotel room itself. Previous guests in this room had also obviously used the water from the shower for something and so the hotel room had a permanent pool of standing water in it.

Anytime we would walk across the carpet, it would make a “splosh, splosh, splosh” noise as the saturated carpets oozed water up over our feet. I can only imagine what sort of fungi and bacteria were growing in there.

As there was no furniture in the room other than the bed, we were compelled to sleep with our luggage on the bed to avoid having it become soaking wet.

There was electricity in the room, but only one light and a couple of the sockets worked. Also, I suspect due to the standing water everywhere, the light and outlets would periodically crackle and pop in a quite dramatic and unpredictable manner.

Now, we’re not whiners and so all of the above would have been bearable, but for the freezing temperatures. With just a thin (and, of course, filthy) blanket on the bed, we shivered all night. In fact, when we woke up in the morning, ice had formed in the room. So, it wasn’t just us. Unfortunately, the sodden floor was not frozen, which actually would have been an improvement on the swamp that we had instead. I assume this was due to heat radiating up from the rooms below.

Getting dressed and putting on our shoes on top of the bed – the only dry spot in the room – was an interesting experience.

The kicker is that as I alluded to above, we actually paid quite a lot for the room.

Fortunately, we only had to stay one night there, but it was a memorable night.

One thought on “Ramallah”