Communism and raw, smokestack industrialism seem to go hand in hand like apple pie with ice cream in the popular imagination… So, it seemed more than appropriate when we paid a visit to the belching smokestacks and roaring furnaces of North Korea’s Chollima Steel Complex.

Named for a mythical winged horse, the Chollima Steel Complex was a showcase component in the broader Chollima movement introduced by Kim Il-sung at the end of the Korean War to “re-energize” the Democratic People’s Republic of Korea. This “re-energizing” involved the rapid expansion of production capabilities across an array of industries.

The Chollima Steel Complex, which used to be named the Kangson Steel Plant before its heroic reinvention as Chollima, did its part in this expansion and was superficially quite successful as the quantity of steel produced certainly increased in the short-term. However, given the abandonment of rational economic management, the quality of the steel produced dropped significantly.

The entrance to the Chollima Steel Complex: 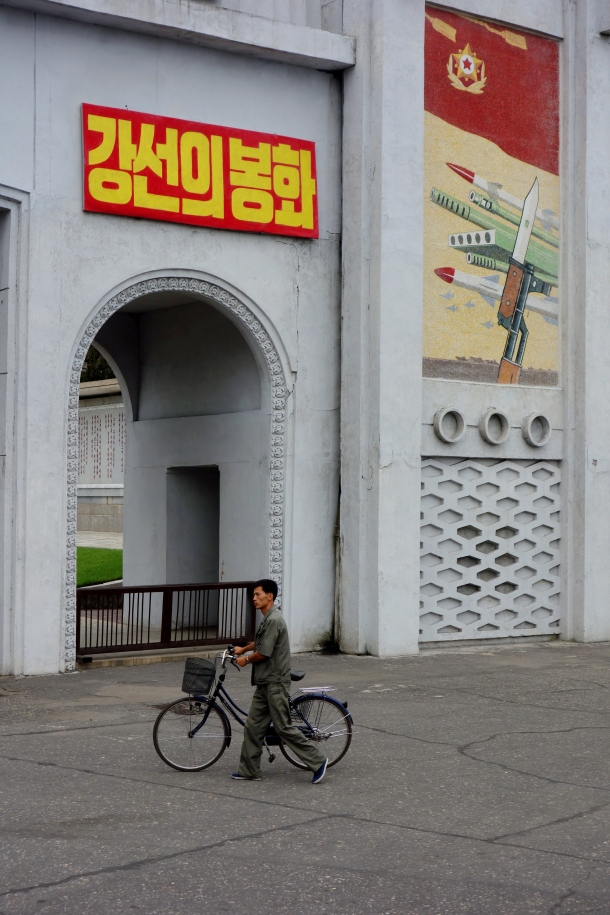 The immaculate grounds of the massive steel mill… As this is a showcase site, there is plenty of show and propaganda to accompany the functional aspects of the steel production: 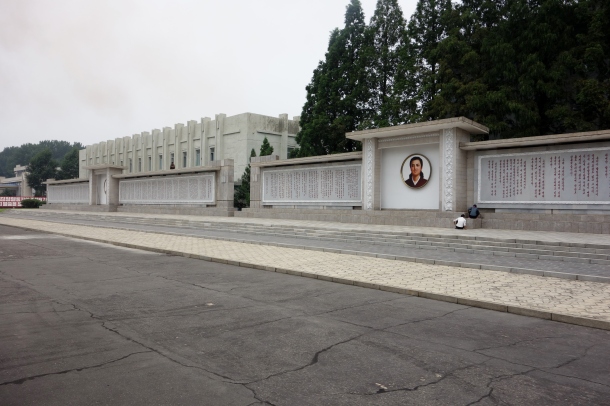 Officials and representatives of the Chollima Steel Complex: 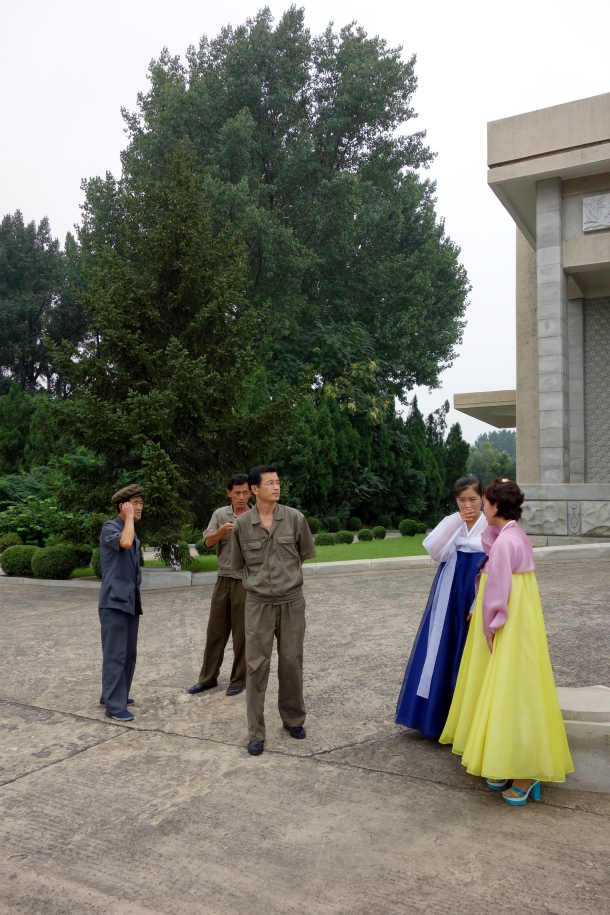 The guide/representative that escorted The Velvet Rocket staff around the site: 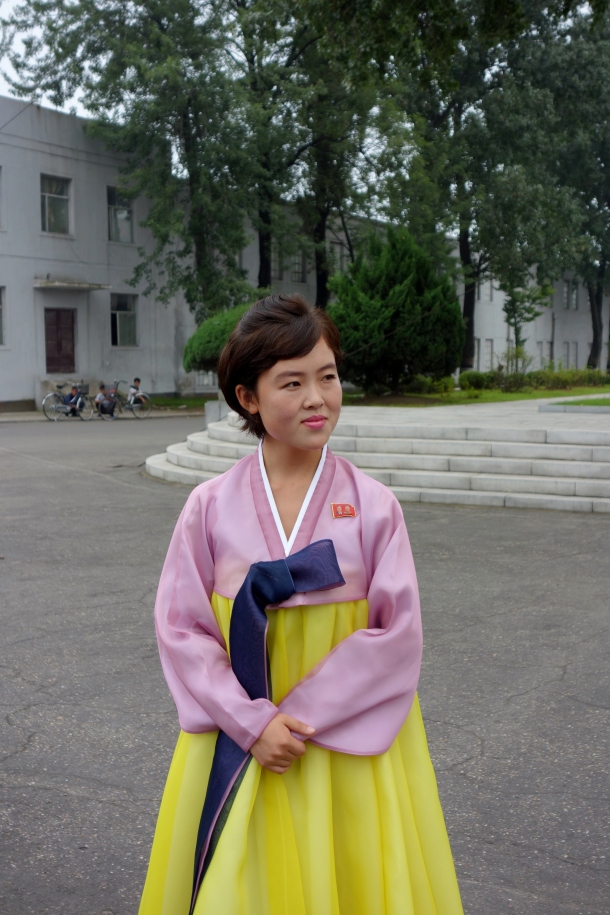 Toxic smoke billowing up over the steelworks… Sensitivity to environmental concerns hasn’t really caught on in North Korea yet: 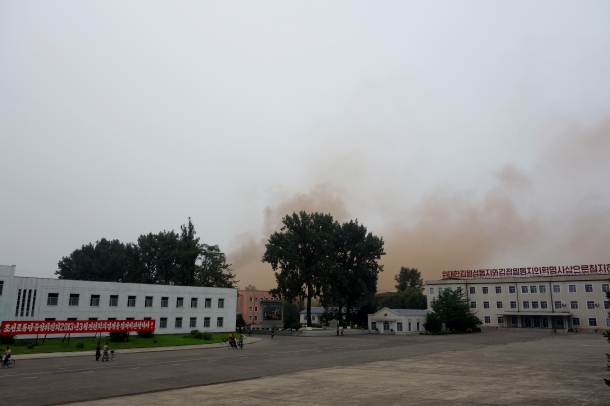 Operating a steel plant takes a lot of power: 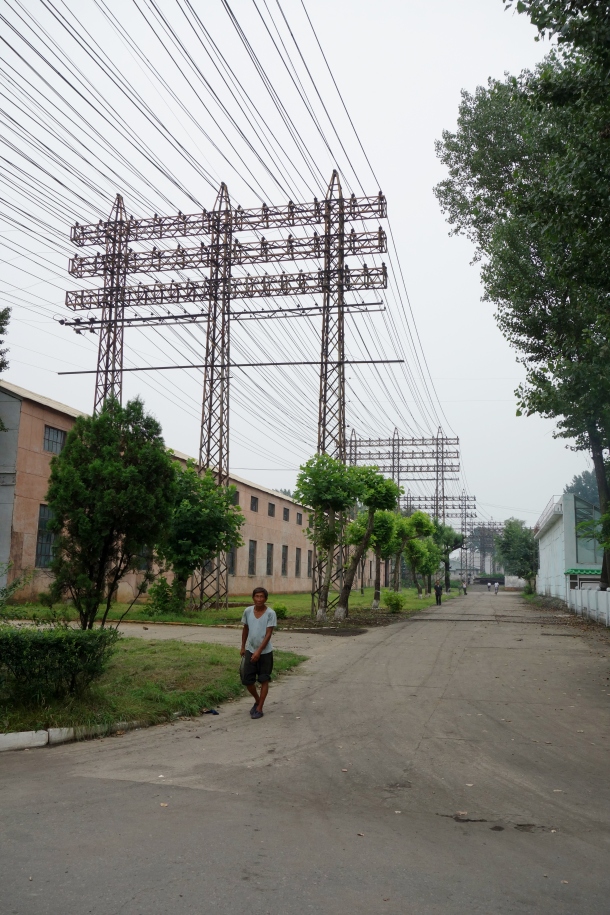 One enters the main production floor through a cavernous hallway. Since it is North Korea, the lights are out in this hallway and so one feels as if they are walking through a darkened tunnel that suddenly opens up to this scene: 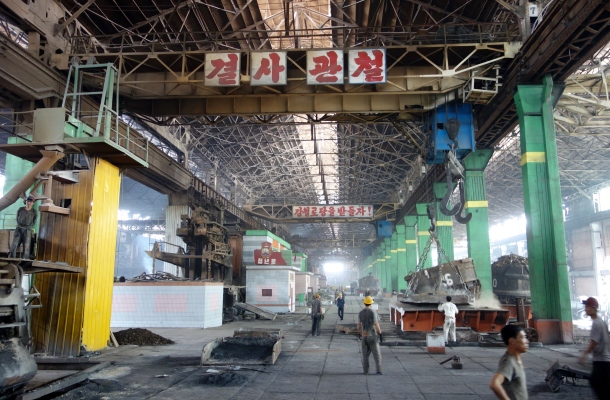 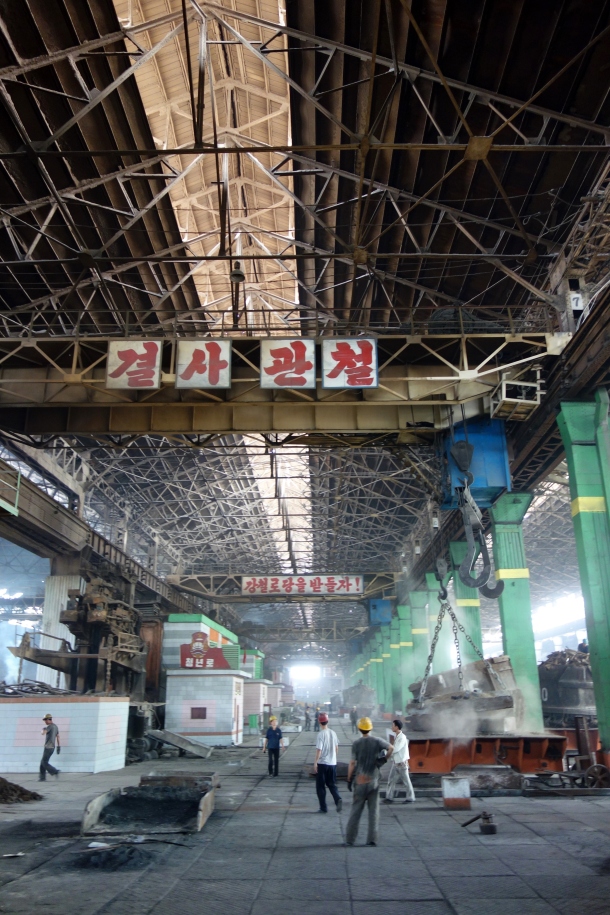 Another perspective of the heart of the steel mill: 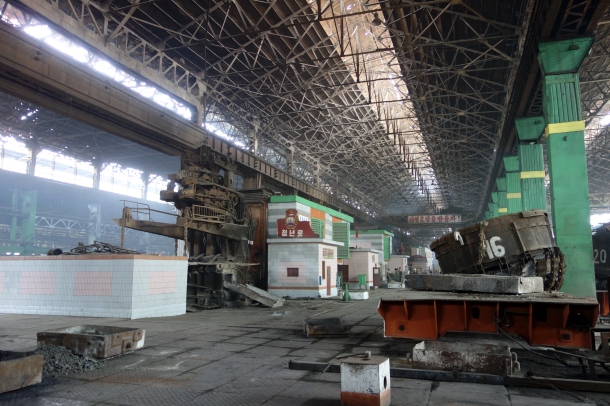 A furnace being worked on off to the side: 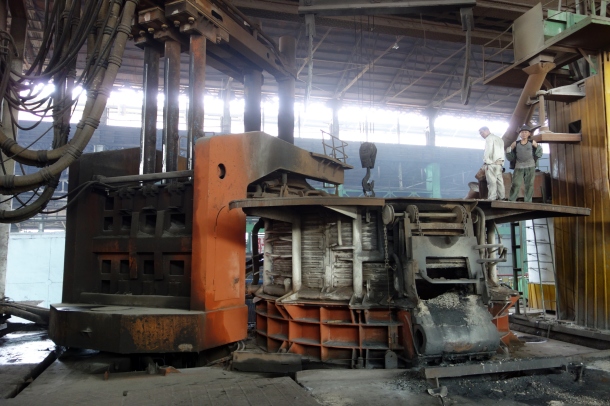 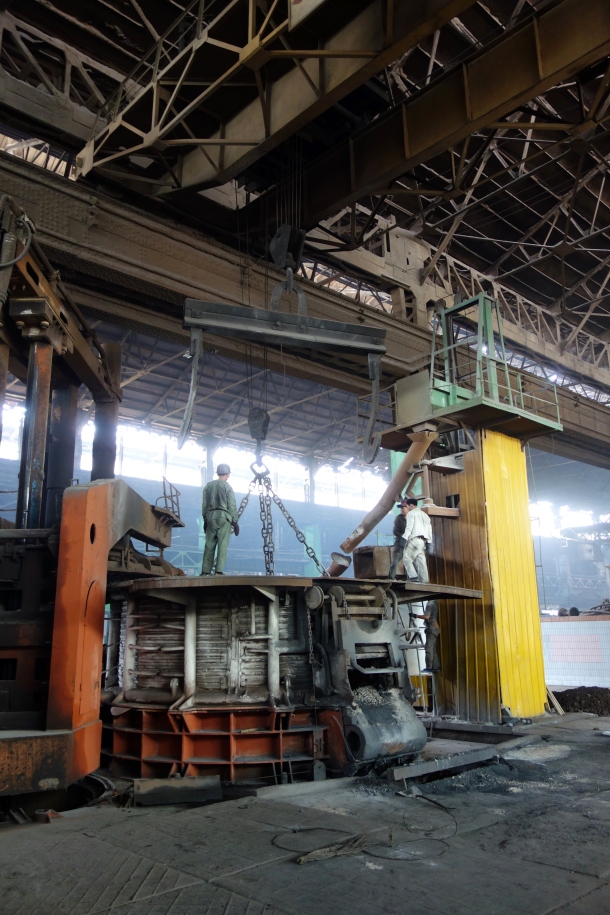 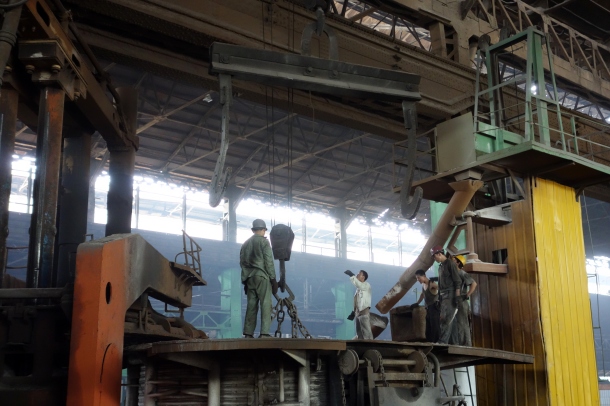 Everywhere one looked inside the steel mill, there was something going on. It didn’t necessarily seem like it was connected to the production of steel, but everyone was doing something: 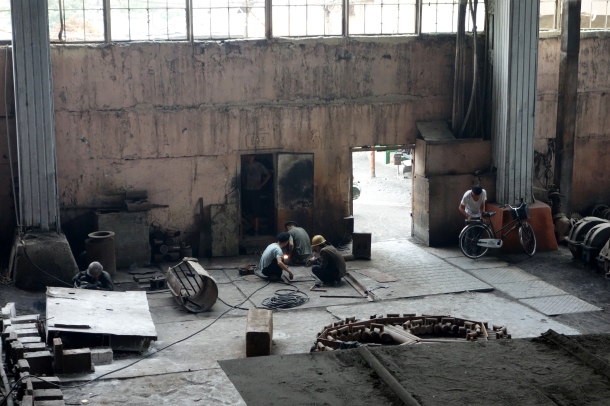 A slag heap growing on one side of the factory: 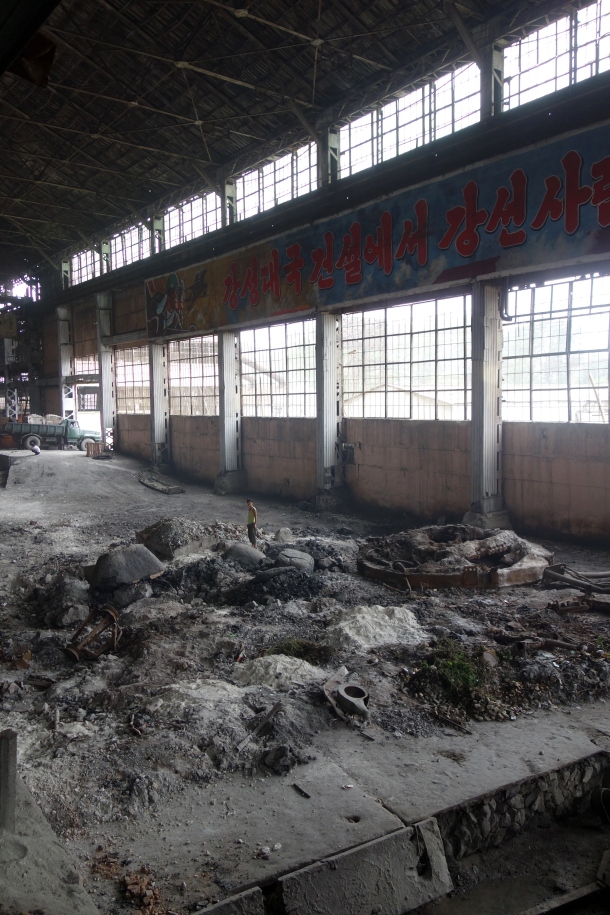 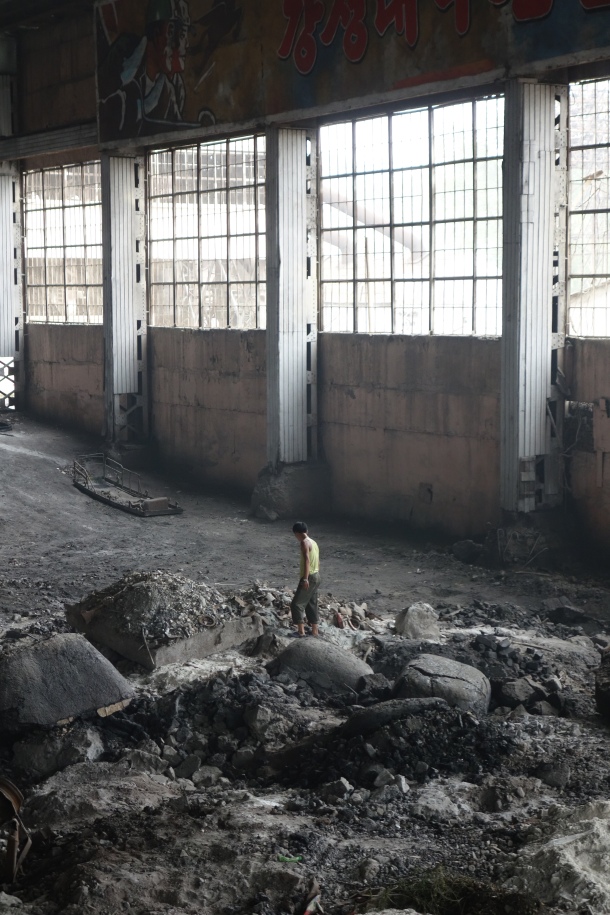 A photographer with an artistic eye could really do a lot in a place like this: 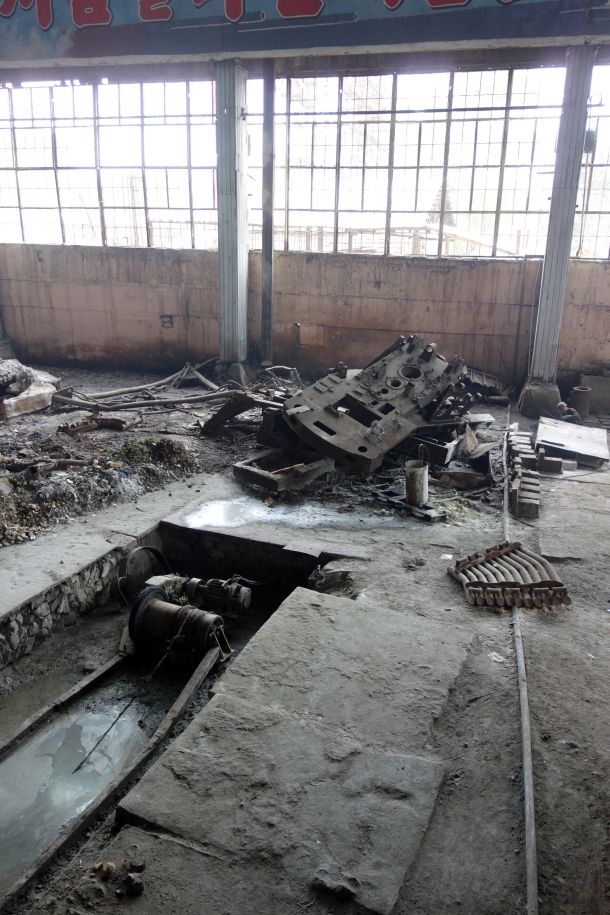 Exiting the production floor, one passes by this room where events are monitored via CCTV: 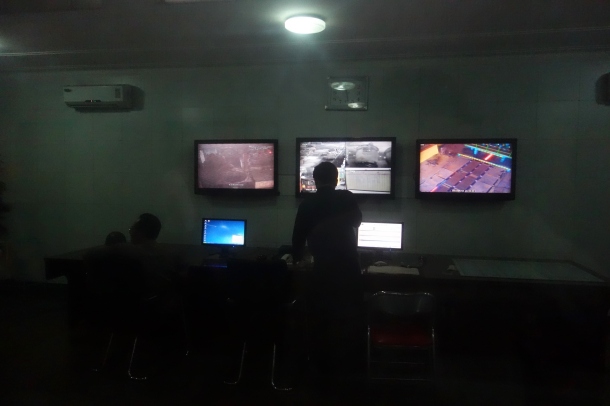 On the other side of the hall is this workshop: 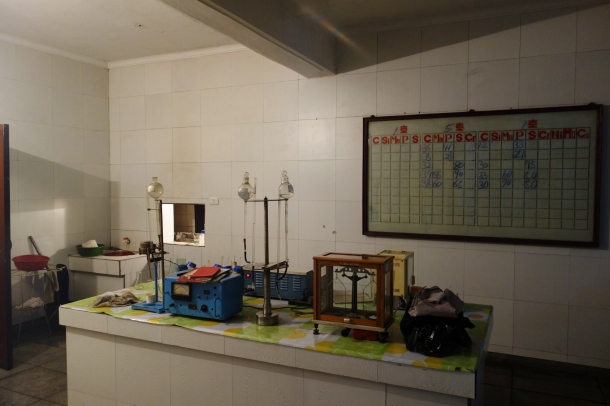 Back outside again, one is immediately welcomed by these animal sculptures that were apparently inspired by Winnie-the-Pooh. It’s hard not to love Communist propaganda and expression (one can see similar creations in areas formerly under Soviet control)… 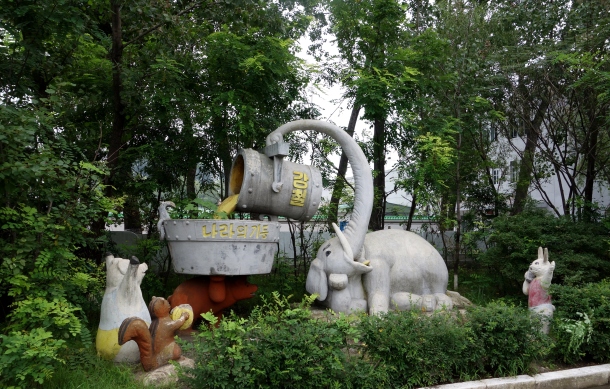 A palatial museum is on the grounds of the Chollima Steel Complex and once someone is found to turn the lights on, the museum offers background on the history of the steel mill as well as additional information about visits from The Great Leader (Kim Il-sung) and The Dear Leader (Kim Jong-il): 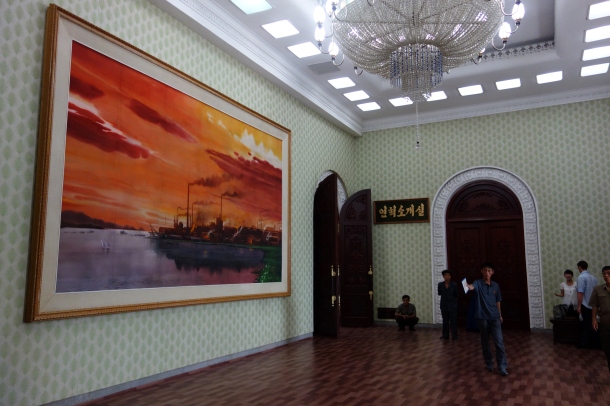 An elaborate monument marks the spot across from the museum where Kim Il-sung is said to have provided some of the “field guidance” that North Korea’s leaders are famous for… There is a tree next to the monument that is considered sacred as the tree was there when Kim-Il-sung made his first visit to the Chollima Steel Complex and shaded him as he spoke: 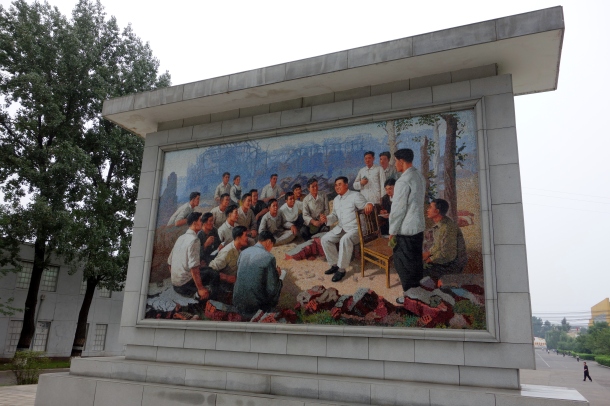 Fittingly, a propaganda van passed by just as we were leaving… These vans drive slowly around the cities and the countryside blasting out revolutionary slogans and songs to inspire and energize the people of North Korea: 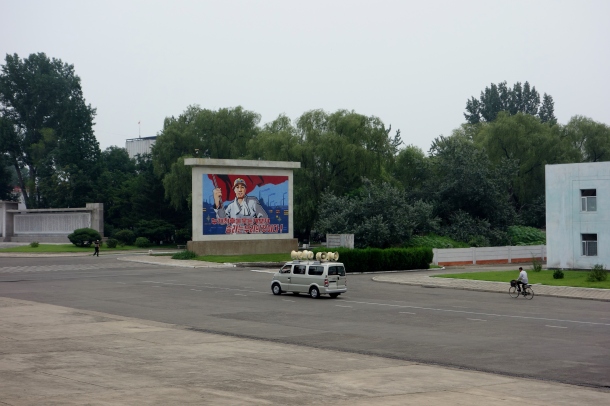