Located in Plumas County near the town of La Porte, the cliffs pictured below mark the site where the gold rush town of Pine Grove used to be:

Until recently, I did not know that Pine Grove used to be here. I just thought it was an interesting mining site. So, all of the pictures you see in this post were taken in complete ignorance of their greater historical significance. I’m afraid I know very little about Pine Grove, but the next time I am back in the States, I will research it and update this post accordingly.

What I do know is from the owner of a mine in the area, the Lady Be Lucky, who advised me that the town was located out by the present-day road. Apparently, the population maxed out at about 350 people, but the town did include such essentials as a stage stop.

There is supposedly still a cemetery up in the hills pictured above, but no one I know has been able to locate it. The last official survey of the cemetery was back in 1972 when Helen Gould documented three markers.

And to my knowledge, there is no further evidence that a town used to be here.

Pine Grove may be gone forever, but mining persists to this day. The former Pine Grove area is now the Cole Cash (aka Comet) Mine. And for all I know, the Cole Cash/Comet may have bulldozed away all that was left of Pine Grove. 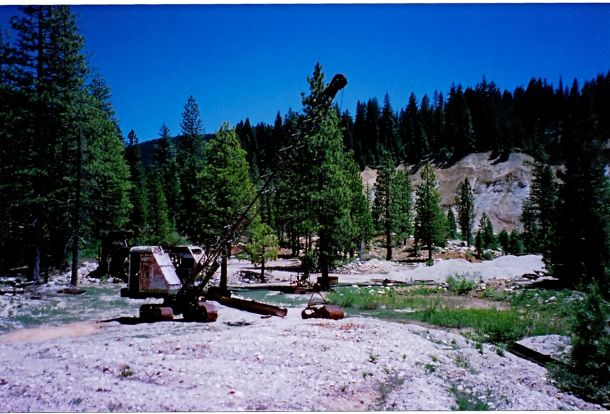 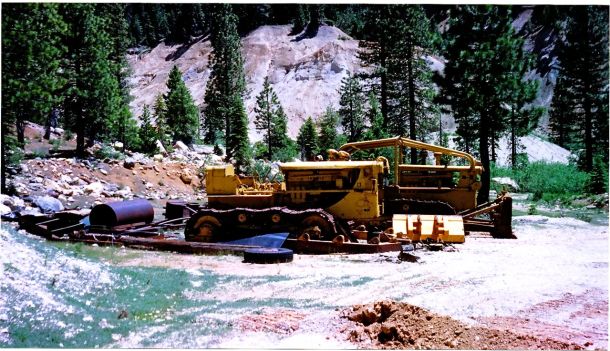 And deposits it in these trucks to transport the ore…

To a staging area, where this crane unloads it… 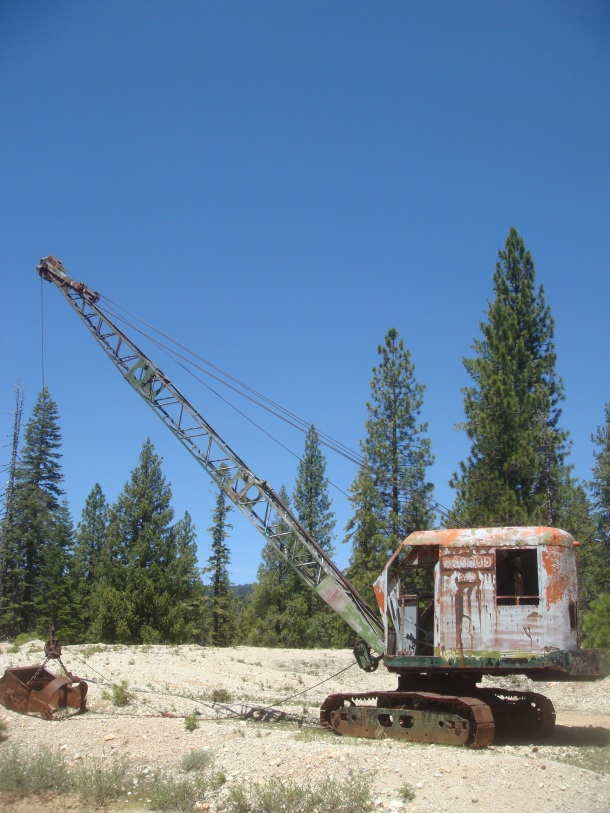 Into the top of this device, which is really just a fancy sluice box… The mud, sand and rock which comprises the ore is dumped into the top while large volumes of water are pumped through. This washes the ore over the grooves in the device. Gold, being heavy, sinks to the bottom of the grooves, while the majority of the remaining mud is washed out. Later, the miners can go back and collect the gold which has collected in the grooves. It’s low-tech, but actually quite efficient:

This is the pump that draws water from a nearby stream for the device described above:

And this is where the water drains from the device described above:

Into these ponds where the water can be pumped out and run through the device again:

It may not be the most environmentally friendly practice, but it is interesting to explore (to me at least).

Also very close to Pine Grove and the Cole Cash – or Comet – Mine is the Lady Be Lucky Placer Mine: 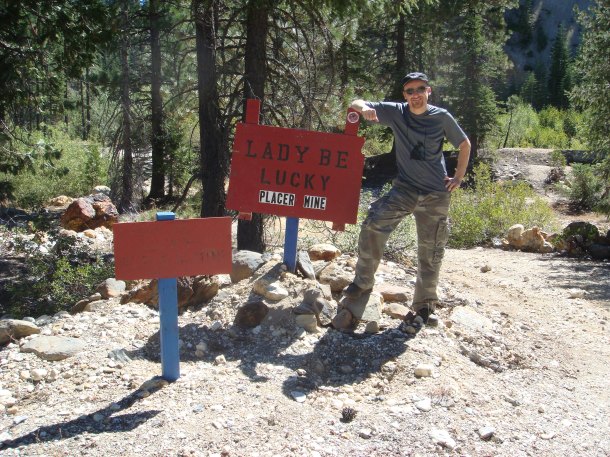 “My mine is open pit at present. There are two shafts on it. One is 150′ deep, and full of water. The other is blocked. It’s 20′-30′ deep and hits a tunnel that was used for sluicing. Recovery was done below decks. The tunnel goes out to the canyon. The mine was mostly a hydraulic operation, but also was a drift mine (tunnels). The last hydraulicing was done in 1941 at my place.

The gold is mostly fine stuff. A big part of the reserves up there are in arsenical pyrites that hold gold. The early miners knew of this, but didn’t try to recover this form of gold (with one exception-the Empire at Potosi). Some of the black sands run 20/ozs. to the ton. When I roast the black sand, pulverize it, screen to -100 mesh and very gently pan it, I get very little pieces of gold which weren’t seen before treatment. Today, it gets high tech fast in mining. Try 128,000 colors to the ounce. This stuff smelts, bulk assays, leaches. A bar is a bar is a bar.

We are in permitting, too. My partner, a construction contractor, got pole axed by the depression. So things are on hold for awhile. I’m looking for a new partner and some capital and will shortly be advertising for same.”

For a short video clip showing the Lady Be Lucky Mine and the hydraulic mining artifacts above it, click here.

The pictures used in this post are from several trips and different cameras, hence the difference in quality and appearance.

3 thoughts on “California Ghost Towns: Pine Grove And The Cole Cash (or Comet) Mine”