Opened to coincide with Kim-Il-sung’s 70th birthday in 1982, the Grand People’s Study House was constructed as a sanctuary of learning and and as a force to intellectualize the nation. Our minder explained that, specifically, this meant using the center to further one’s socialist training and to develop an even greater respect and love for the Kim family…

It further serves as the national center of Juche studies. Accordingly, the symbolic placement of the Grand People’s Study House and the Juche Tower across the river from each other was no coincidence.

The Grand People’s Study House is located at the head of Kim-Il-sung Square and, built in the traditional Korean architectural style, serves as a dramatic backdrop to events and footage from the square: 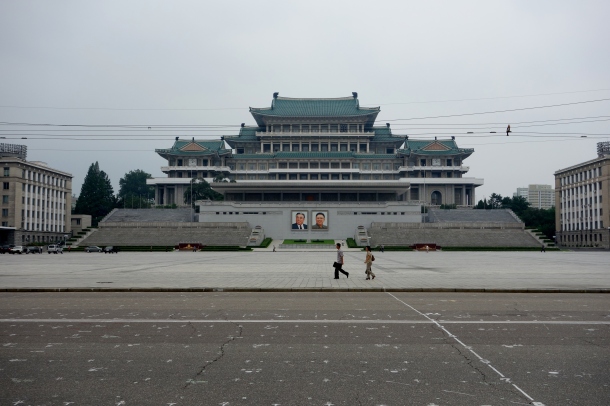 Our North Korean minder that accompanied us while we explored the establishment: 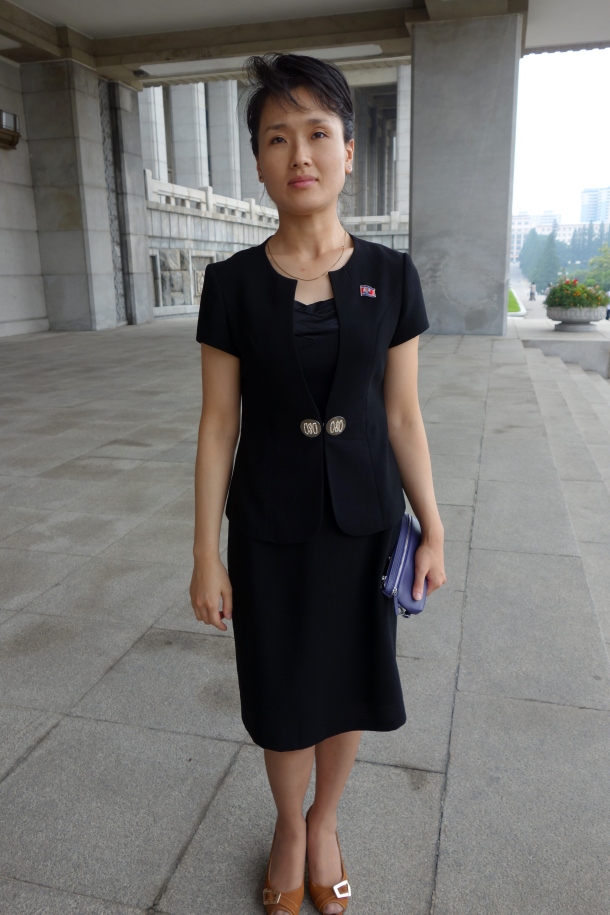 The entrance hall of the Grand People’s Study House is dominated by this statue of Kim-Il-sung: 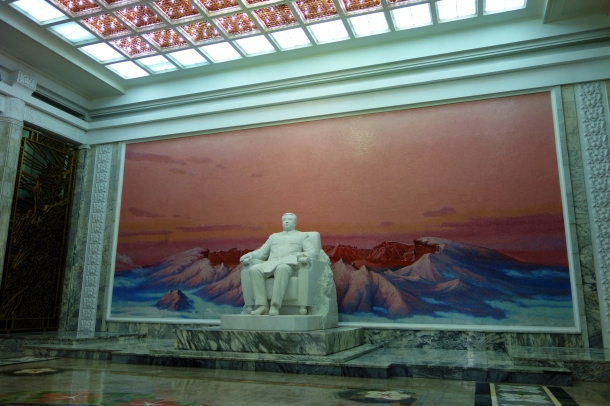 A side view of the entrance hall from the escalators rising on either side of the Kim-Il-sung statue: 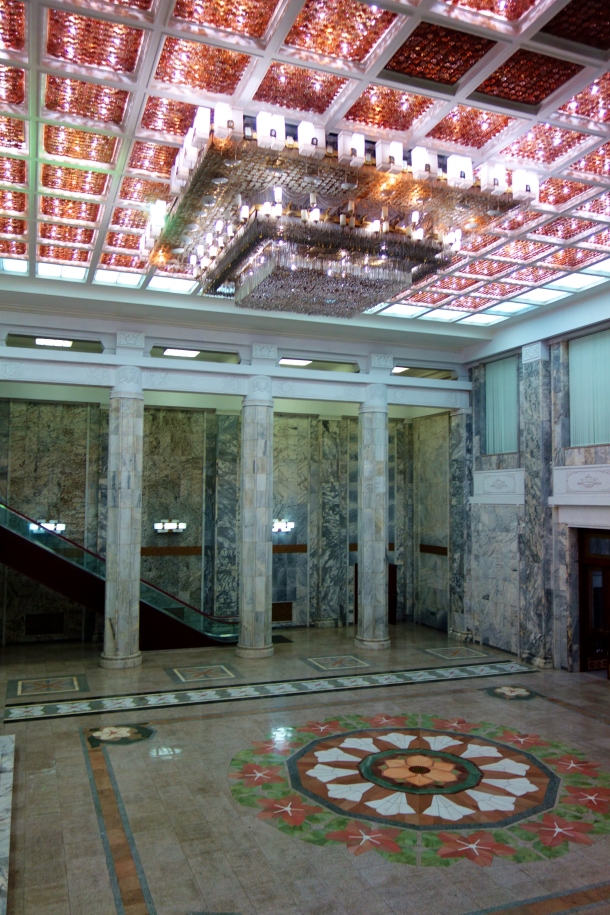 And at the top of the escalators, another reminder of the ubiquitous influence of the Kim family is found: 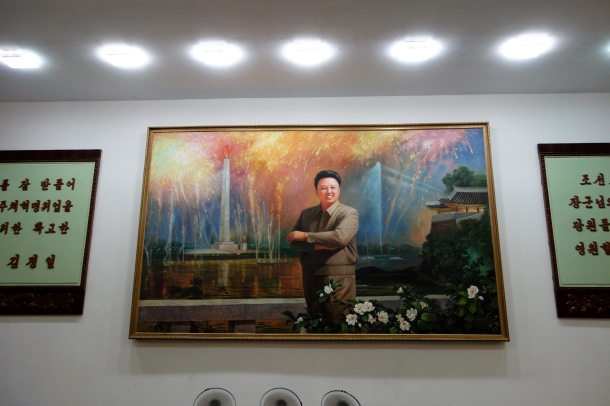 Aside from paintings of the Kim family, the hallways are also dotted with heroic scenes from the Korean War.

After riding up the escalators past Kim-Il-sung, the Grand People’s Study House opens up into this large chamber… 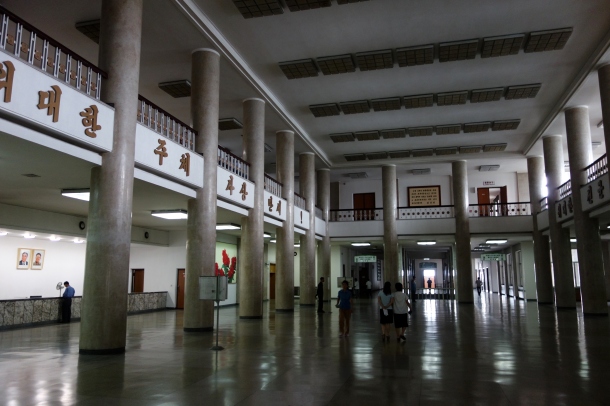 …which was staffed by a bored-looking librarian. Since it involves work with computers, this is actually considered a fairly prestigious job in North Korea: 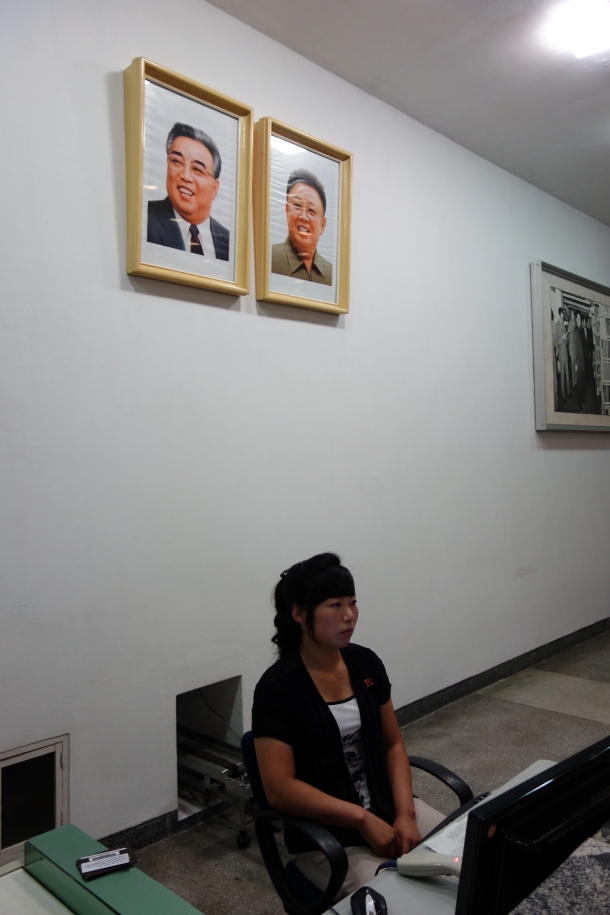 From the large chamber pictured above, hallways branch out in all directions, leading to various libraries, lecture halls and labs.

This is an electronic registry of the various books and materials available in the libraries: 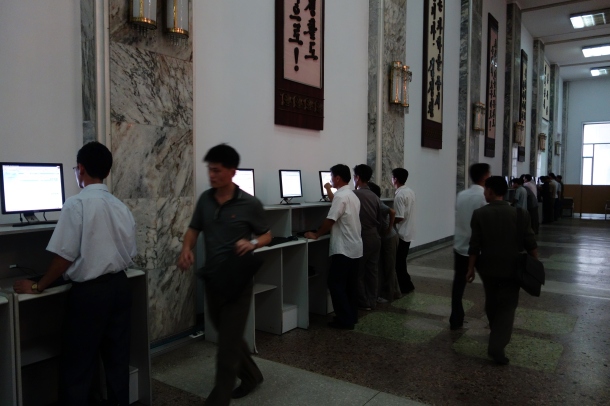 One of the library rooms: 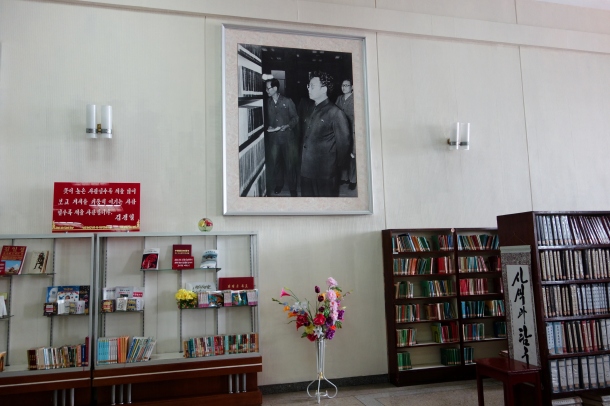 A study hall in the Grand People’s Study House: 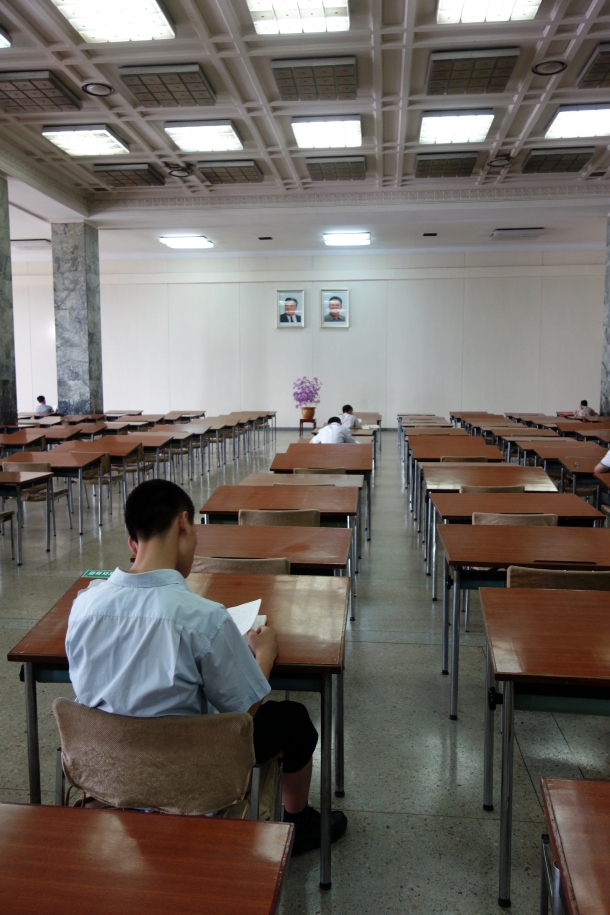 Brushing up on his socialist training: 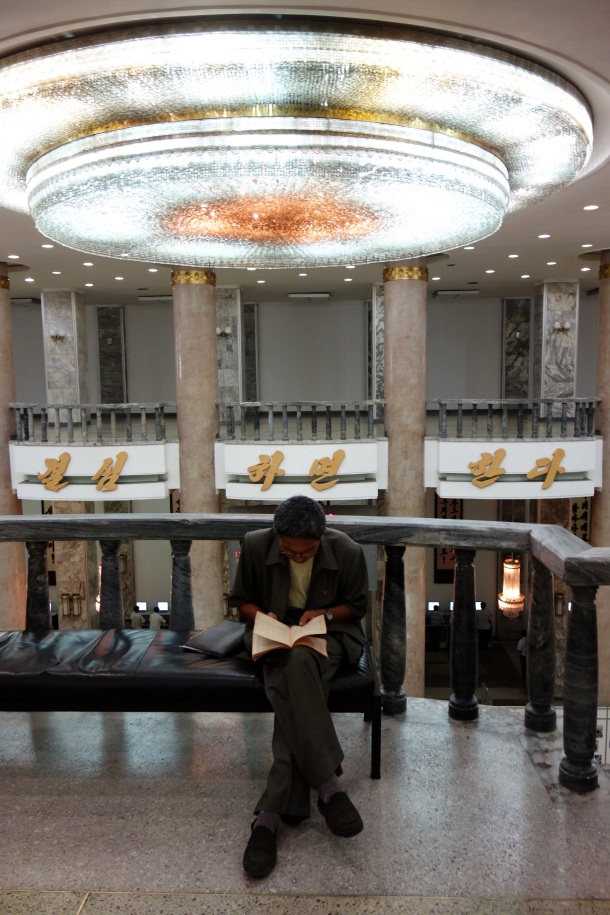 Elsewhere are lecture rooms (always with the requisite pictures of The Great Leader and The Dear Leader): 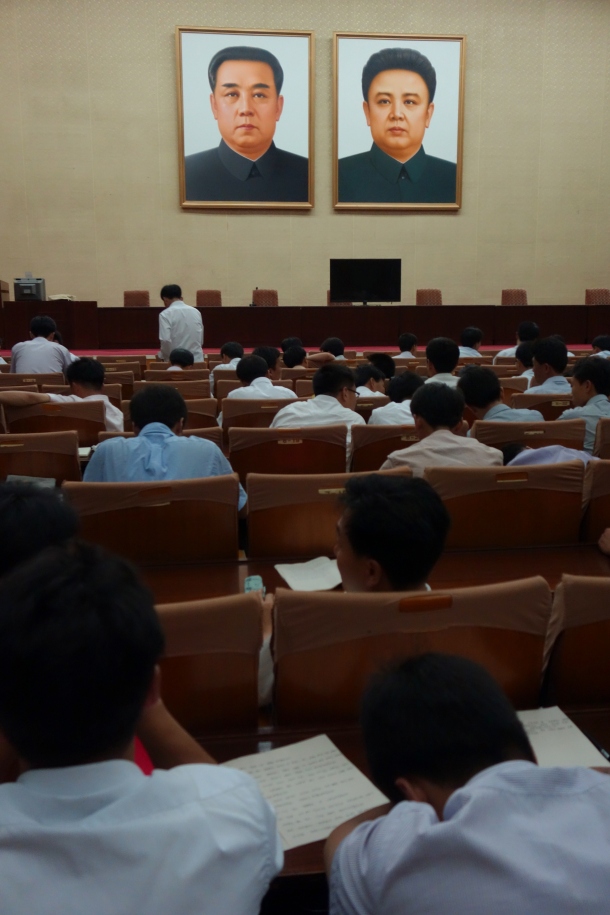 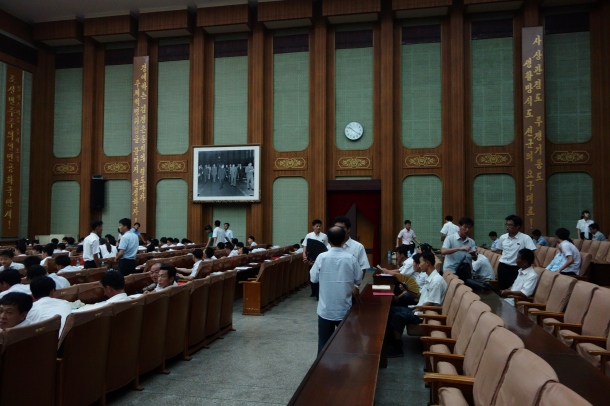 Even in Pyongyang, electricity is in short supply in North Korea, so some of the hallways and chambers are quite dark: 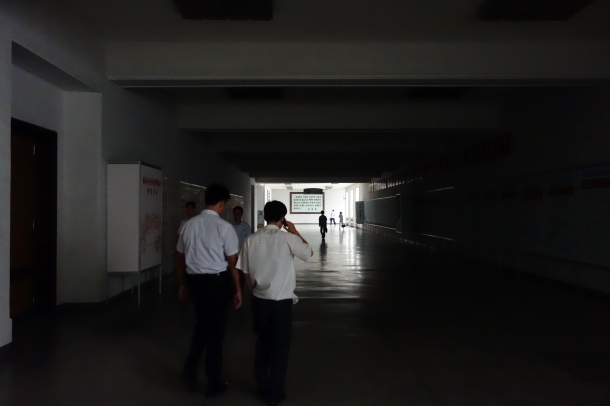 An intriguing wing of the building to explore: 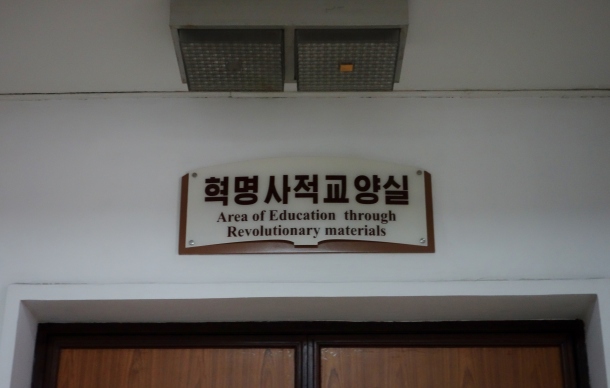 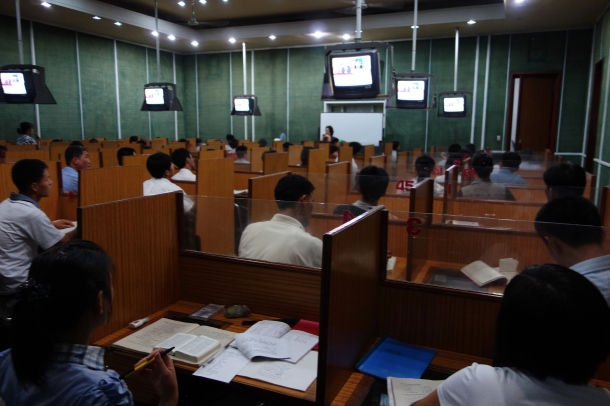 The music appreciation room had a lot of Korean and classical music, but I also noticed Madonna’s True Blue album: 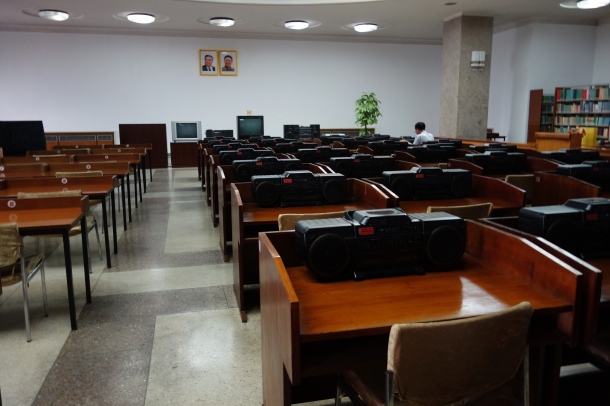 Presumably, this was some sort of room for film appreciation: 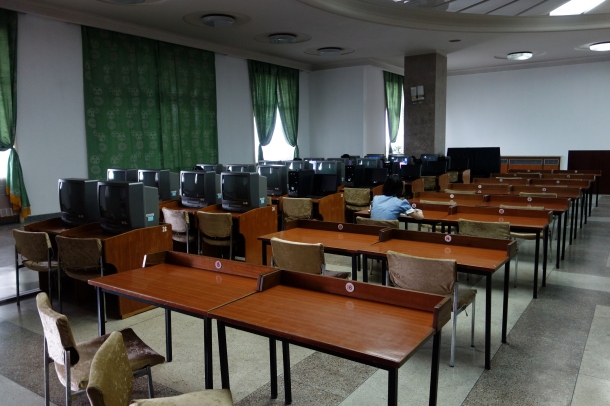 A class on computer-aided design (CAD): 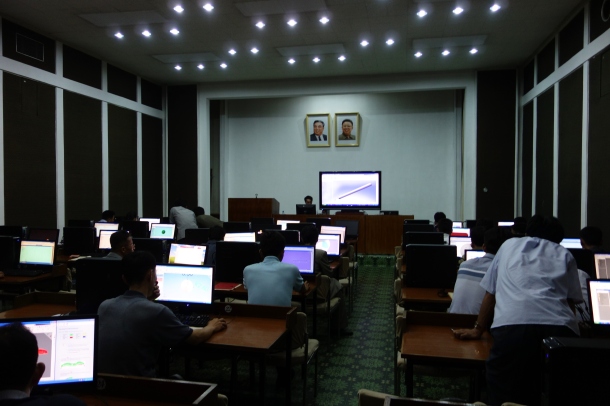 One of the computer labs… Students are able to access a North Korean intranet, but not the global internet we know. 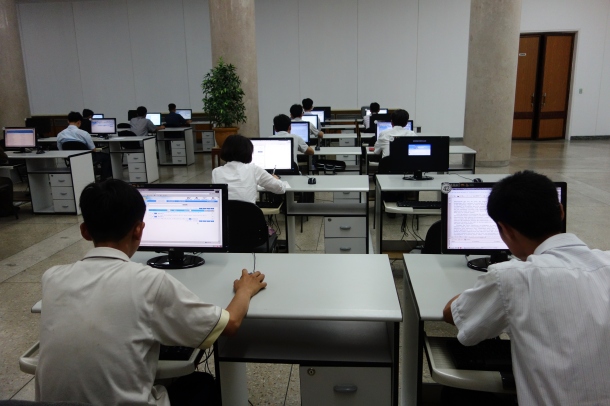 The view from the balcony on the top floor is quite impressive… Below you can see Kim-Il-sung square and across the Taedong River is the Juche Tower: 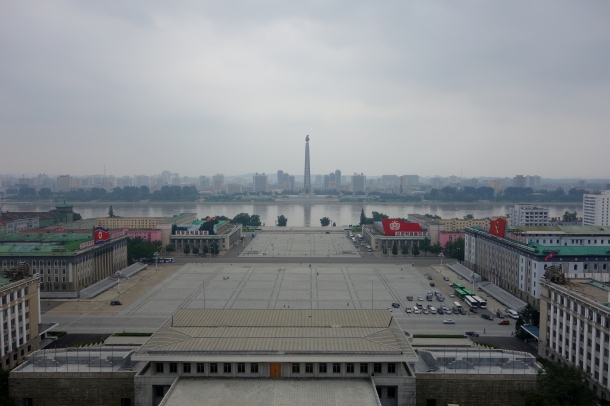 A view out over the rooftops: 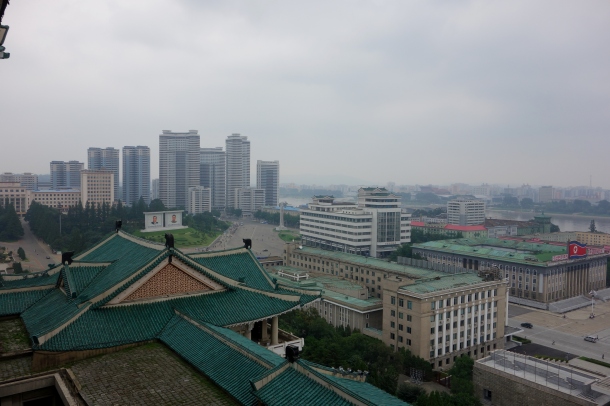